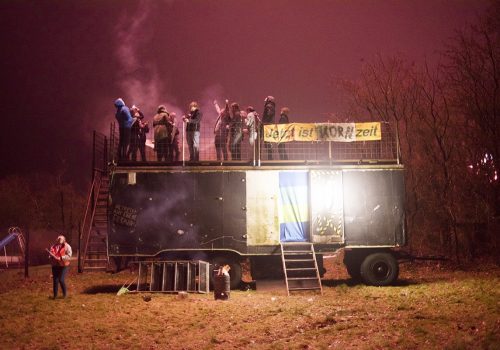 The Krakow Photo Month festival, coordinated by the Dutch curator Iris Sikking, revolves around the theme “Space of Flows: Framing an Unseen reality”. For this event, Sikking has taken three themes – nature, immigration and the digital environment – each accompanied by a dozen exhibitions and additional events. What must be remembered is that, in the face a new global social system where images circulate more easily than people, strictly documentary visual language is powerless.

Each artist shown in Krakow, even though all are mostly photographers, is confronted by the limits of the medium and breaks from it to reinforce it with sound, animated images and new technologies, all being used for an unrestrained staging – the display is thought out in four rather than three dimensions, superimpositions are frequent and there is a plethora of written documents, presented sometimes in a sculptural way. The aesthetic seems to be put to the service of the philosophical, even the political, to challenge the invisibility of the system. The fact that the festival opened with an exhibition by Jules Spinatsch is revealing; by imitating the technical process of surveillance cameras, he re-orders a fragmented reality – a view made from parts of scenes that are rebuilt regardless of their boundaries. By extension, this fragmentation of the world appears to be the principal consequence of globalisation and the lack of responsibility that it provokes – and this from the perspective of the social contract, respect for nature and private life.

The world is fragmented into sub-worlds between which we erect walls, both physical and moral – “Globalisation has led to waves of nationalism”, notes Tudor Bratu in his work inspired by his family’s migratory history. More than the zones of flow and movement, it is the disturbance of the spaces of exchange that the artists explore here, And for this, everyone experiments with modes of visualisation, representation and narration to translate the invisible, the abstract, often by mixing the relationship to time, to express the idea of a recent change of perspective.

Michal Luczak, who has produced work about coal mining in Poland, recalls that he remembered the “Pollution” newsflashes broadcast each evening after the eight o’clock news during the 1980s. This is now taboo, hidden, despite the undeniable presence of its presence. Fear reinforces political opacity. But fear is not a productive response, recalls Rune Peitersen about the new technologies during a lecture entitled “Data and Power” (“Données et pouvoir”)

The answer is the knowledge and appropriation of this new paradigm whose consequences extend from society to the environment because as Esther Howers insists, “The lack of understanding leads to a lack of responsibility”. Through all these works and their diversity, the festival offers to awaken consciences to the vulnerability of the current situation, while making photography itself, entrenched here within its limitations and being reinvented in the process, a metaphor for society.

Laurence Cornet is a journalist and independent curator specialising in photography. She lives in New York and Paris.