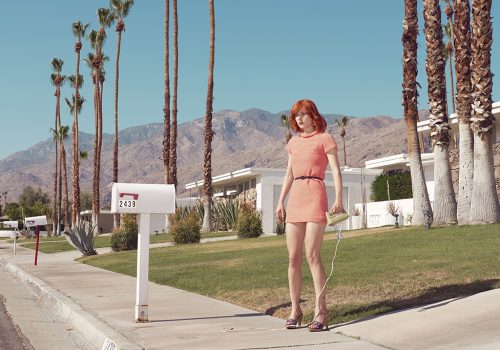 Inspired by the House’s heritage of travel, Louis Vuitton’s Fashion Eye collection evokes cities, regions or countries through the eyes of fashion photographers, from emerging talents to its legends.

Is there a better place than California to stage? Not really, according to Kourtney Roy‘s series. Photography plays the models, let’s admit the actress, in this appropriation of the common places of the West Coast. What’s left behind the “clichés” behind the landscapes that resemble the Hollywood sets, behind the real life of the people who are normally part of the decor? It remains the unchanging beauty of spaces that we no longer look at.

While browsing for the first time this book, one could believe in a photo novel without text or a road movie without a car. It is after the reading of the interview of the artist by Patrick Remy, publisher of the book, that we understand. If Kourtney Roy is first photo-graph, she is also an actress close to the clown who considers her turn of the Cali-fornie as a big show, a lot of costumes and accessories on the back seat. Her style of relaxed typist, sometimes pulling the pin-up without embarrassment, fits perfectly in the slow motion landscapes of Los Angeles or Route 66. The approach, supposed to wake up the eyes on the objects become invisible, works in the reappropriation of places. The spontaneity to the end of the hair (wigs) led even the Canadian to jump into the water in the Bay of San Francisco or to cover himself with fake blood on the Golden Gate. The project is total. But sets and costumes are not enough to make a movie mood. It is to the person in front of the objective that this consequence returns.

In addition to the lead role, Kourtney Roy also holds the device. It unveils with simplicity the contours of a California that one could imagine as a place of passage. First by the often primary colors that she chooses to reveal to their best complexion. Then in the persistence of vertical and horizontal lines, made possible by the pylons or the alleys, as if the visit of the American State had been made in traveling. His California is very similar to that of the artist Ed Ruscha in the fascination with colors, billboards or signs, gas stations or endless roads. She quickly becomes Lynch or Hitchcock in the movement she proposes, the shift of atmospheres and the stupefaction to be found in places where calm disturbs, as if one was waiting in these photos that death surprises her. In wanting to embody these “other places”, real physical spaces capable of inhabiting the imaginary, she seems to unite the heterotopies of Michel Foucault to the pasteboard studios. The break with real time is consumed.

This slow and unrestrained race in contemporary California, though a little decrepit, also serves as a discourse on the American middle class left on the hunger of the promises of the American dream. The social discourse is not voyeuristic and expresses itself gently in the treatment of the passions of “others”. A superman in costume, just happy to be there, or a cool grandma in a tanning session serve as companions to Kourtney Roy’s scenes. The redoubled presence of the symbols of Americanism as consumer society (donuts, ketchup, milkshakes) and social or cultural practices (bodybuilding, superheroes, baseball) reflect the desire to seize its object without judgment, because symbols do not do not become icons. They fit all their naturalness in this portrait that is not oriented. Neither the romance of a past America nor the kitschy judgment of his present betray the pages.

One question remains: how to deal with common places without making “clichés”? The staging of the photographer helps to formulate an answer. His approach to the “me” is liberating. It opens up possibilities. In these self-portraits, the discrepancy proposed by the difference between the subject -represented-and the artist-representative-favors the redefinition of identities in space and time. Thus, Kourtney Roy’s California becomes a playground where beauty expresses itself without complex, since nothing is taken seriously, as long as everyone lives as he wishes.