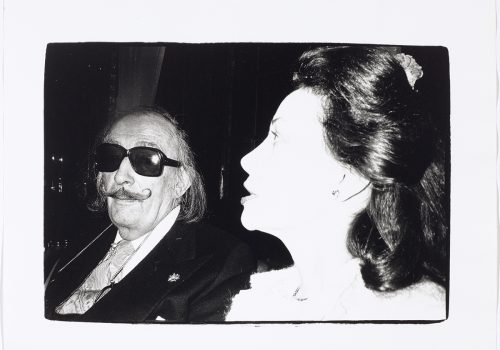 The focus of this December’s Photography auction at Koller is clearly on portrait photography. Featured is Andy Warhol’s portfolio “Photographs” with 12 original photographs (lot 1705). Consisting of social photos of stars and celebrities, they include portraits of Liza Minelli in her bathrobe in her dressing room, Bianca Jagger getting a spa treatment, Salvador Dali with Ultra Violet, the fashion designer Roy Halston imitating a woman, Tennessee Williams and Lester Persky hugging, Peter Malatesta gazing at Monique van Vooren’s cleavage, Henry Kissinger and Elisabeth Taylor kissing each other on the cheek, Truman Capote lying on the sofa at home and Pope John Paul II greeting believers. Among them is also a self-portrait of Andy Warhol, who with this work places himself in the same class as the other prominent personalities.

Three one-of-a-kind photographs by Warhol will also be offered in the sale: Polaroids of Toni Schumacher (lots 1702 and 1703) and Paul Anka (lot 1704). The latter is also signed by the Canadian singer. Another outstanding portfolio shows Pablo Picasso at bullfights in Fréjus, Arles and Nîmes together with friends and family (lot 1697). A portfolio of 45 original photographs by Lucien Clergue comes from the former collection of the art collector and author of the definitive catalogue of Picasso’s graphic works, Georges Bloch (1901–1984). Also in the realm of portrait photography is an ingeniously composed nude photograph of Kate Moss in Marrakech by Albert Watson (lot 1709). The photograph evades precise categorization, and is simultaneously a still life, a landscape, a portrait and a fashion photograph.

Contemporary photography is represented by major photographers such as Thomas Ruff (lots 1714, 1719 and 1720), Nobuyoshi Araki (lots 1712 and 1713), Luigi Ghirri (lots 1723 and 1724), Vik Muniz (lot 1718) and Richard Misrach (lot 1735). The latter shows the Golden Gate Bridge on a particular day and time from a vantage point on the photographer’s porch, an excerpt from his three-year project.

In the field of classical photography in this sale, works by Robert Frank (lot 1678), Balthasar Burkhard (lots 1653 and 1654), Geraldo de Barros (lots 1642 and 1643) and Mario Giacomelli (lots 1646 –1650) deserve special mention. In addition, some interesting photographs from the early work of the Hungarian photographer André Kertész (lots 1668–1692) are also on offer.

As usual, the offer is broadly diversified, including works of historical and travel photography with some exciting daguerreotypes (lots 1601–1610), stereo photographs (lots 1611 and 1612) and views of China by William Pryor Floyd (lots 1614–1616). Swiss photography is represented by a series of winter portraits by Albert Steiner, Emanuel Gyger and Arnold Klopfenstein.

Alongside to the main auction, Koller will once again hold an online-only auction. Bidding opens on 25 November and closes on 10 December. Here, too, there are some attractive lots by well-known names such as Martin Parr, Florence Henri, Louis Stettner, Man Ray, Erich Lessing and László Moholy-Nagy.

Phillips : Tailor-Made : Fashion Photographs from the Collection of Peter Fetterman