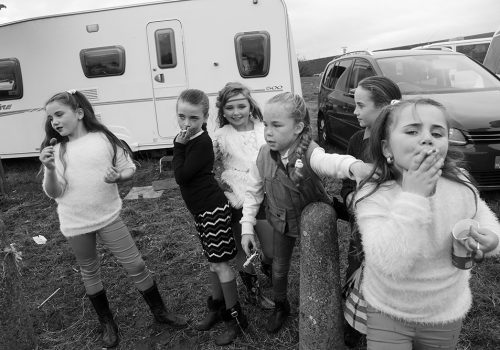 “In Johnson’s intense and poignant photographs, some of her young subjects gaze at the camera unflinchingly, while others smile joyfully, but all seem validated by her camera. These are not privileged children, but by the close of Johnson’s volume, their intimate and compelling images and words make us question received notions of privilege. – from the introduction by Professor Mary M. Burke, University of Connecticut and author of Tinkers: Synge and the Cultural History of the Irish Traveller.

American photographer Jamie Johnson has devoted her over 20-year career to photographing children and the process of growing up. In 2014 she was invited to Ireland to document the Irish Travellers, a nomadic, ethnic minority that have lived on the margins of Irish society for centuries. She was introduced to a group of Travellers at the Ballinasloe Horse Fair and Festival, an annual event in County Galway where Travellers from Ireland and Europe come to set up camps, reunite with family and friends, and sell puppies and ponies. The children are left to run footloose and fancy free with dolls, animals, and candy cigarettes. While the Travellers don’t usually like outsiders, Johnson’s warmth, kindness and show of respect won them over and she was granted full access to photograph their lives and culture.

Johnson, a mother of two girls, immediately fell in love with the outgoing, fun loving Traveller children who were eager to pose for her camera. They would become the focus of a five-year photo project documenting the Traveller community that involved regular trips to Ireland. The resulting images are warm-hearted environmental portraits that capture the children’s grit and beauty, resilience and optimism, and pride for their family and cultural values. In this close-knit community that faces constant prejudice and racism from Ireland’s mainstream society, loyalty to family is paramount.

Over eighty duotone photographs from the project will be published in Johnson’s first monograph: Growing Up Travelling: The Inside World of Irish Traveller Children (Kehrer Verlag). Each trip to Ireland deepened Johnson’s bonds with the community and her special relationship with the children who she invited to follow her around and take turns using her cameras.

Among the special characteristics of the Traveller children is their passion for fashion. The boys are depicted looking sharp and tough while the girls are shown adorned in designer dresses. The childhoods of these little men and women are short. Raised as devout Catholics, their goals are to fall in love, get married young, and have plenty of children. The boys can’t wait to leave school so they can go to work with their dads. The pictures in the book of caravans and animals evoke a sense of freedom from societal constraints that the children describe as “unfettered.”

Interwoven throughout the book are quotes from the children sharing what is important to them. Here are highlights:

“Traveller girls always have beautiful hair – I will never cut my hair; it is my identity.”

“Traveller kids are lucky ‘cause we live in nature and have ponies.”

“Traveller girls love fashion. Being beautiful is everything.”

“It’s important for Traveller boys to be tough.”

“Family is always the most important thing in the world. My mother is very happy; she tells us we are very lucky.”

“We don’t sit at computers or play games all day; we are always running about”

The book includes an essay by Professor Mary M. Burke, University of Connecticut and author of Tinkers: Synge and the Cultural History of the Irish Traveller. In addressing how Johnson’s work counters the way mainstream society views the Travellers she writes: “Jamie Johnson’s volume is a work in which Traveller children living in roadside encampments and halting sites (both legal and illegal) defiantly celebrate their culture in the face of a centuries­old and ongoing message from settled society that it is a world of little value. Johnson’s photographs, taken in Galway, Limerick, Cork and Tipperary, celebrate the vitality, beauty and cultural pride of minority children to whom such terms are all too rarely applied. Moreover, the words of her young subjects underscore that this is beauty and vitality according to Traveller definitions and not those of mainstream Irish society.”

In her artist statement, Jamie Johnson writes: “It is with an honest heart I hope to show that these beautiful children who have great hopes and goals and work every day to reach their dreams no matter how hard they have to fight racism and stereotypes placed on them for centuries. A child is an innocent, happy, precious part of the world that should be loved and accepted and encouraged no matter where or how they live.”

About the Photographer: Jamie Johnson (b. 1968) is a Los Angeles based photographer specializing in documentary photography and alternative processes. As a mother and photographer, Johnson’s work focuses on childhood and the process of growing up. For the past several years, Johnson has journeyed to Ireland to photograph the Irish Travellers, an ethnic minority who adhere to a nomadic lifestyle passed down for generations. The relationships Johnson has built with these families over time has allowed her to capture intimate portraits of children whose childhood often appears to be too short. Johnson’s work has been published extensively and exhibited in art galleries throughout the US and Europe consistently over the last 9 years. She has received the Julia Margaret Cameron Portfolio Award and Spider Black and White Photography Award. Johnson’s work is in the permanent collection of the Fowler Museum in Los Angeles and Archaeology Museum in Alabama. Her photographs are also in the collections of some of the biggest art collectors in the world and owned by dozens of A list celebrities.

About the Essayist: Mary M. Burke is Associate Professor, and Director of Honors (English) and of UConn’s Irish Literature Concentration at the University of Connecticut. She is the author of “Tinkers”: Synge and the Cultural History of the Irish Traveller (Oxford) and 2017-19 Chair of the MLA Irish Forum Executive Committee. A former Notre Dame NEH Keough-Naughton Fellow, former Boston College-Ireland Visiting Research Fellow, and former President of NEACIS, a regional chapter of the American Conference for Irish Studies, the largest such organization in the US. She is a native of Ireland and a graduate of Trinity College Dublin and Queen’s University Belfast. Her current book project considers Ulster-Irish identity and culture in America.

The Inside World of Irish Traveller Children