KAZAL – Memories of a massacre under Duvalier: a photographic approach 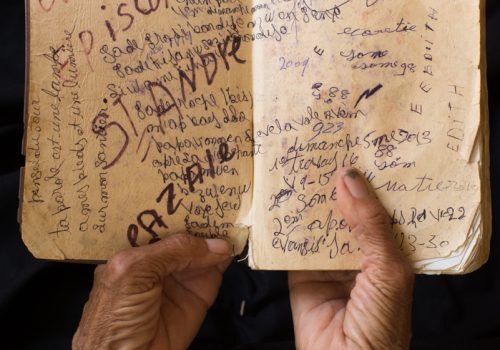 KAZAL is a photographic project that traces the memories of the dictatorship of François Duvalier in Haiti through the history of Kazal, a village north of Port-au-Prince in Haiti, where a major event in the contemporary history of the country was perpetrated in March 1969 and obliterated from official history: the massacre of Kazal.

We are six Haitian photographers, all from the first post-Duvalier generation. Over the course of three years, we created a dialogue with the inhabitants of Kazal to interrogate their memories of places and events. For us, what ensued was a true encounter with Haiti’s troubled history and past, that to this day, has not yet been acknowledged. This feat was also a long and complex personal journey, where we were forced to manipulate social, cultural, and geographical barriers. Us, city dwellers of the capital going at the encounter of the people of Kazal, most of them peasants and farmers.

In the spring of 1969, military and militia of the regime crushed an uprising of peasants angered by the dictatorship that imposed abusive taxes and forbade them from taking water from the river that flowed through their village. After a few weeks of hostility, from the 27th of March to the 16th of April, at least 23 peasants were killed, 80 had disappeared, and 82 houses were burned down.

We will never really know how many people died, how many women have been raped. Only rare materials traces and a few witnesses of this history have withstood deterioration and the passage of time. Nevertheless, emotion rises to the throat when one visit this land, look at the faces of those who were until that moment strangers, listen to the voices forgotten by history textbooks, the country’s tribunals, and archives. In a country where History slips between fingers, where memory crumbles, words are said and fly away misunderstood.

As a medium, photography is one possible way of telling the story, next to more ancient ways such as oral storytelling, writing, theatre, etc. At the same time, as a form of testimony to the past, photography is a substance and can be a source of historical knowledge. It reactivates the memory of  historical facts and invites us to reflect. That being said, photography remains a fragmentary witness, partial, subjective, polysemous : a photograph tells us as much about the photographed subject as it does about the photographer. It remains an interpretation of reality that can never fully be  grasped.

The project, produced by FOKAL, is both a book, a traveling exhibition and a web long-format that wishes to shed light on the stakes of the dictatorship. As one of the witnesses of the event reminds us: “Life is a continual return”.

The photographers behind the project are Edine Celestin, Fabienne Douce, Reginal Louissant Junior, Moses Pierre, George Harry Rouzier, Mackenson Saint-Felix of Kolektif2d. The artistic direction was provided by Nicola Lo Calzo with the coordination of Maude Malengrez. The project was produces by the Fondation for Knowledge and liberty-FOKAL and K2D.

The book, published by André Frère (Fr-En-Kr), to be released in France on March 26, 2019, is accompanied by texts from anthropologist Claudia Girola and writer Edwidge Danticat, among others.

The first exhibition takes place at the Dufort Gingerbread house in Port-au-Prince from March 28th, on the occasion of the commemoration of the 50th anniversary of the Kazal massacre.