Kacper Kowalski: “I see the ground through the architect’s eyes.” 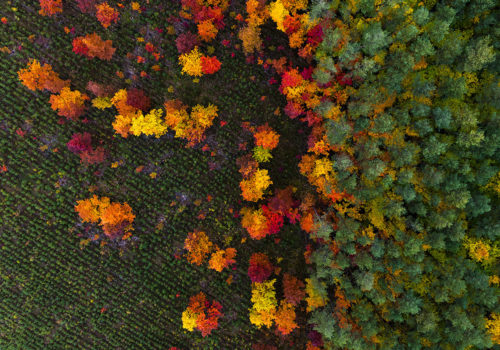 Kacper Kowalski has an obsession, and it is not photography. It’s flying. When he’s on the ground, Kowalski, 39, never so much as picks up a camera, but to create his new body of work, Over, he flew back and forth across Northern Poland, covering 10,000 square miles. He did this during the bitter-cold of winter, sometimes in a paraglider, sometimes in an open-hull gyrocopter–essentially a golf card with a propeller—pointing his camera at fields, forests, industrial sites, and other traces of man.

The former champion paraglider (in 2009, he placed 2nd in the world in his event) flies 500 feet above the Earth, and his precise, painstakingly composed pictures reveal the land as we’ve never seen it – familiar yet also abstract and ethereal. While he was in from Poland for the opening of his current show, Fade to White, at The Curator Gallery in New York City, Kowalski spoke about his vision, drones, and the future of aerial photography.

You think of yourself as a pilot first, then a photographer. How much time have you spent in the air?

Can you remember the first aerial photos you ever saw?

They were in a schoolbook – black-and-white photographs that showed Gdansk before, during, and after WWII. Soviet soldiers destroyed 90 percent of downtown Gdansk; they had a unique way of liberating cities. But my first aerial view was from the 7th-floor apartment in which I grew up, playing in front of floor-to-ceiling windows with a huge, unlimited view of the city and the sea. I was a dreamer sitting by that window. It was a good place to wonder about the world below.

Eventually, you went on to study architecture…

Yes, and then I worked in a studio for four years. The photographs I make now are born from what I learned as an architect. When I’m flying, I find the forms, features, shapes, symmetry, compositions, and drama—just as I would draw them in blueprints.

So do you approach your work as an architect . . . or as a photographer?

I see the ground through the architect’s eyes. I see how humans plan, I see how nature reacts to our actions, I see order and oncoming chaos. Like an architect, I study how people live, and I am sensitive to mankind’s relationship with the environment. I try to show all of this in my photographs.

Where do you place yourself in the tradition of aerial photography?

There have been many different approaches to looking at our world from above. Ed Burtynsky, Georg Gerster, George Steinmetz, and Yann Arthus-Bertrand – each had a different way of telling this story, with a different style, different purpose, and a different viewer in mind. And mine is unique as well.

Because I’m trained as an architect, I am detached from the cannon of photography; I come from a different visual background. But the fact that I’m a pilot first and a photographer second also has an impact on my pictures. A photographer might think ahead of a great shot, and then he might say, “What’s the best way to get that shot? Should I use a balloon? A drone? A Plane?” My method is different: I fly first and find the story when I’m in the air. It’s an organic approach that leaves me open to discovering a story, a feeling, a mood.

Likewise, some aerial photographers like to bring back pictures of the world’s most exotic places – deserts, for instance – or famous landmarks like The Great Wall of China. For me, it’s more challenging to show you things you may have seen before, but not necessarily in a way that you’ve seen them. I look for beauty in my own backyard and take all of my pictures within a day’s drive of my home in Gdynia.

Your photos get much of their power through what you choose not to include, which can turn them into abstractions. When I watch people in the gallery take in your work, there’s often a moment when they don’t understand exactly what they’re looking at.

I like the little moment when people don’t know exactly what’s in front of them. Sometimes the object in the frame may feel somewhat familiar but it’s not immediately recognizable as a bridge or a field or something they’ve actually seen a thousand times.

Without these contextual clues, a massive ice floe can look like cells under a microscope, a barren orchard like calligraphy.

The pictures have more impact without those clues. They make you think more and look for your own answers.

Your perspective on the earth is distinctive, but 2.5 million drones were sold this year. Now that anyone with $200 can see the world from the sky, how does that change what you do?

It is the end of one age and the beginning of another. The time of humans alone showing the earth is finished. But this is what technology does. It happened with balloon photography, with analog photography, and it happened with GoPro. And it’s fine. The expectations from an aerial photograph have changed. But for me, as a pilot, I ask, Where is the pleasure in a drone photograph? It’s like having sex over the computer.

What does a human photographer bring to the picture that a drone does not?

In the right hands, there can be a more human feel to a man-made picture because the human is the witness. If I have a tear in my eye, I can communicate it. If you want to feel the artist’s hand, be a part of his or her decisions, if you want to feel everything that the artist has brought to this moment from his past, this is the picture you want.

The idea of the photographer’s past is–

—Humans have so many references, both conscious and unconscious, from previous photographs that it becomes easier for us to see a perfect moment and capture it. Humans can see what is about to happen. We can wait for specific moments—of light coming, of wind rising, of weather changing. The drone is a great and amazing tool, but I am able to see moments that are invisible to it, and to other people as well.

So how do you see the future of aerial photography unfolding?

For me, it’s extremely exciting to think about. When an aerial view becomes available to everyone on a massive scale, then it will be as common as seeing the clouds from a plane window which, of course, can still be spectacular. When drone prices go down and when the batteries get light enough, I see a time when every person will have live access to a network of drones.

How will they be used?

Cities will be mapped – eventually, the entire Earth will be mapped – and you’ll be able to jump, visually, from one drone to another, seeing the world without leaving your house. One day, these perspectives will become ordinary and even expected. And in the far future, perhaps this will even be done with VR.

The skies will be crowded then.

They’re crowded now. My recent work, that you see in the Fade to White exhibit, was all done in the winter. That was for artistic reasons but also because it’s harder for drones and other pilots to fly in poor conditions with low visibility. Wintertime is really the last territory that I still own. At least for now.

Bill Shapiro is the former Editor-in-Chief of LIFE magazine; on Instagram, he is @billshapiro.