Justine Kurland, The call of the road 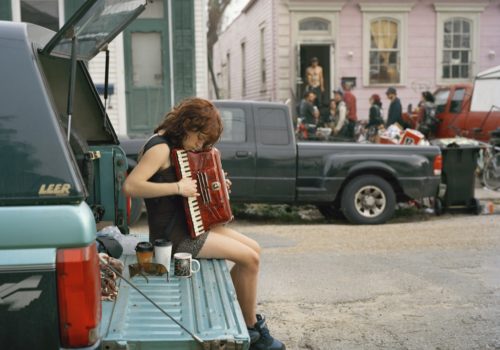 Published by Aperture, Highway Kind allows us to (re)discover the impressive body of work of the American photographer Justine Kurland, from her early series, such as This Train is Bound for Glory, to the most recent Sincere Auto Care.

Justine Kurland has spent the better part of the last twelve years in her green minivan, which was carefully equipped to fill the needs of her young son Casper, aged 3 months on her first trip. Since 2004, they have crisscrossed the country together, mother and son, two accomplices almost unwittingly always taking the same road, from New York to the Pacific Northwest Coast. When winters are harsh, they seek refuge in the south and abandon it at the first sign of summer heat. Like Robert Frank behind the wheel of his old, second-hand Ford, or John Steinbeck in his camper truck, Justine Kurland devours the road “like a starving man a multi-course meal.”

From moments of magic to chance encounters, what comes into view is a dystopian nation, both romantic and abrasive, having shed the trappings of capitalism. Heavenly bums, anarchists of all stripes, utopian communities lost in idyllic nature embody the slow dissolution of the American dream. The whistle and the metallic sheen of a snaking train sometimes cut across these detail-filled stretches of silence, photographed with a medium size camera, it reminds us of how much humans have shaped the landscape. In Justine Kurland’s work, we can feel a sort of fascination, which the artist gets from her son, for these powerful machines. Partly autobiographical, with the earliest photos directly inspired by her runaway experience, her work pushes the limits of storytelling. Her open, deliberately incomplete images invite the viewer to fill in the blanks, since, as the writer, critic, and author of the stories in the book, Lynne Tillman, reminds us, doesn’t all narrative photography represent a failure?

Cathy Rémy has been a journalist at Le Monde since 2008, where she features the work of young photographers and emerging visual artists. Since 2011, she has contributed to M Le Monde, Camera, and Aperture.