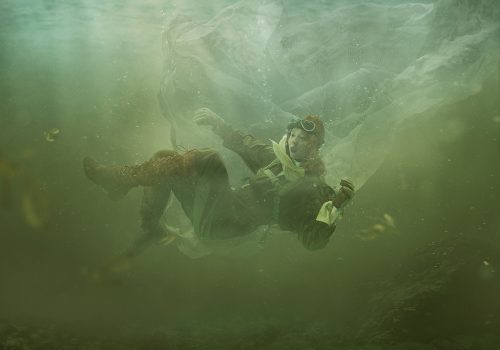 Julia Fullerton-Batten sent us images of her latest project on London’s River Thames along with this comment on the series.

“The River Thames is not even the longest river in the British Isles and a mere pygmy in comparison with many other rivers in the world, yet its significance to British and world history is immense. London is one of the major cities of the world today, but it would not have existed if it were not for the River Thames passing through it. Just before the Thames reaches London it becomes tidal and formed a natural harbour such that London has been a port since pre-Roman times.

Still today, the Thames acts as an artery of communication and trade route between Britain and the rest of the world. I am not alone in my admiration of the glories of the river. Notably, it has been an inspiration to many painters. Monet painted the river repeatedly. Turner too captured the working river even revealing the early nineteenth century fumes and smoke from the city’s factories and river traffic. Whistler was yet another. In the 1860s and 70s he was drawn to paint the bustling and rapidly changing urban neighbourhoods close to the river. But when one views all these works, it is not at all difficult to understand why they all found it such an attractive, potent subject matter.

My own fascination with the Thames has now taken a more concrete form. I have made it into a project and in the process of choosing, investigating and photographing a selection of cultural and historical narratives from along its banks.

The result to-date is the  – Old Father Thames.”

Baptism along the Thames

Since the 12thCentury baptisms have been performed along the River Thames and continue to be even today on personal request. The image was shot at Hatchett’s Ford in the ancient town of Cricklade, Wiltshire where the earliest baptisms were carried out.

Australian Annette Kellerman was 19 years old when she came to the UK to swim the English Channel in 1905. She failed three times but swam 27 miles along the River Thames. Scandalously at the time when women still bathed in bloomers and long sleeve dresses, she wore a self-designed, one-piece bathing suit.

Starting in Dicken’s time young, poor, barefoot, unkempt, under-nourished children in London would scour the shore-line of the River Thames at low tide for anything at all sellable to eke out their own or their family’s existence.

Swan Upping is an English tradition from the Middle ages still performed in July every year when swans on the Thames and their cygnets are counted, caught, weighed and ringed.

In January 2006 a juvenile female bottlenose whale was found swimming in the Thames close to the centre of London, the first since records began. Sadly, all attempts to save her failed. The skeleton of the whale can now be seen in the Natural History Museum, London.

Mary Wollstonecroft (1759 to 1797) was a famous English writer, philosopher and early advocate of womens’ rights. She lived an unconventional life with many love affairs, and attempted suicide twice after failed love affairs. The first was by poison. For the second she jumped off Putney Bridge across the Thames. This time, she was rescued by an observant boatman, but died soon afterwards giving birth to a baby daughter.

Sweet Message in a Bottle

Going to war on a troopship in 1914 a young soldier wrote a message to his wife, sealed it in a bottle and threw it overboard. He perished in battle the day after landing. In 1999, the bottle was caught in his net by a fisherman.  He was able to return it to the soldier’s now 86 year old daughter, who was only 2 when her father went to war.

On and off from the 18thCentury until 1971 Londoners would sun-bathe on the Thames shore in the shadow of Tower Bridge. Because of the tidal nature of the Thames there, sun-bathing was limited to 3 to 4 hours. This area is now closed to the public and special permission was granted for the shoot.

This was the name given to a street in Chiswick, West London, leading to the river’s edge during the 12thCentury, not surprisingly now renamed Fisherman’s Place. It was one of very few crossing points at the time, frequented by travellers and local ladies warding off poverty in their own way.

As well as the annual Oxford-Cambridge boat race, the River Thames is famous worldwide for its international boat-races. From the levitated position of the race box, racing officials have an uninterrupted view of the progress of the event from start to finish.

The Times newspaper of 23May 1867 reported the death of Marie Eugenie, daughter of Captain E.F.S. Lloyd of the Royal Engineers commanding officer of the Grain Tower, a fortification standing in the Thames Estuary. Accessible only at low tide, we see the disconsolate father carrying his daughter across the causeway for burial in a nearby town.

This is a photographic reproduction of the famous painting by John Everett Millais, a famous English pre-Raphaelite painter. It shows Ophelia, a tragic feminine character in Shakespeare’s play Hamlet. She suffered indifference from Hamlet to her love for him. In the painting Millais depicts Ophelia to have fallen from a tree. She lies on her back in the river singing, still clutching a bunch of flowers that she had picked on the river bank. Her clothes became saturated and she drowns. Millis painted the image in two stages, firstly the river as background with all the flowers, then in a second session superimposed his model for Ophelia, ‘Lizzie Siddal’, into the scene. Millais chose each flower to have a meaning relevant to the tragedy. The photograph was shot on the exact same location as Millais’ background and the flowers are exactly replicated in the image. The model herself suffered personal tragedy resulting from the shoot. She developed a chill while modelling for the painting and took laudanum to cure her illness. Laudanum was a then commonly used opiate medicine, even given to babies. ‘Lizzie’ became addicted to it and died from an overdose aged 33.

In 1930 Amy Johnson became world famous as the first woman pilot to fly solo from Britain to Australia and for other record-setting long distance flights. At the start of WW II she volunteered to deliver aircraft from the manufacturer to Air Force bases throughout the country. On one mission she ran out of fuel over the Thames Estuary and was forced to bail out. Her parachute was seen from a ship close by, but she could not be rescued. Her body was never found.

Flooding has occurred along the River Thames for millennia. As the size of London and its population grew, the effects of flooding grew more intense, causing considerable damage to homes, the land, disruption to people’s lives and death. High walls, now called The Embankment, were built along the banks of the river in London in the 18th Century but flooding still occurred. Only when the Thames Barrier became operational in 1982 could the potential for floodwaters reaching London be successfully controlled.

1928 Flooding of the Tate Gallery

Despite flood defences along the banks of the River Thames the Great Flood of 1928 saw the flooding of the basement of the world-famous Tate Gallery situated in the Millbank area of London to a depth of 2.4 metres. Many paintings suffered including several Turner water colours. Many could be restored, the last was rehung in 2011, but eighteen were permanently lost.