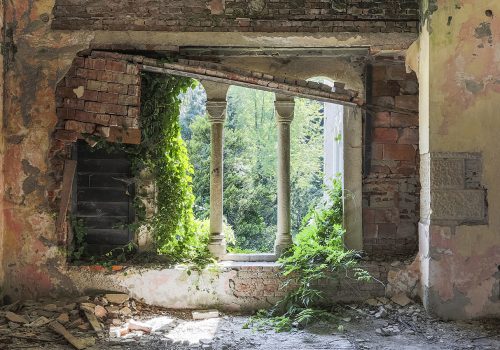 Naturalia: Chronicle of Contemporary Ruins – When I was a child, I saw a wildlife documentary that marked my life. It focused on the melting of the ice caps and its consequences on polar bears’ life. I still remember this bear that struggled to swim and find a piece of ice floe. It marked me so much that during all my childhood, every time any of my parents did anything that seemed bad for the environment, it told them this sentence: «Watch out, you kill the bears!!”

My interest has focused on abandoned places reclaimed by Nature because of this ecological consciousness that moves me since my youngest age. Indeed, this series carries the message that Nature is stronger, and that whatever happens to Man, She will always be there.

Moreover, Naturalia: Chronicle of Contemporary Ruins asks a fundamental question: that of the place of Man on Earth and his relationship with Nature. Far from being pessimistic, and at a time when Man’s domination of Nature has never been so extreme, it aims to wake our consciousness.

Man builds, Man abandons. Every time for his own peculiar reasons. Nature does not care about those reasons. But one thing is for sure, when Man leaves, She comes back and She takes back everything.

This series also tells the story of the progression of Nature, from the infiltration in abandoned places, through the moment where She grows inside them, until their collapse. Burial comes next along with the disappearance of all traces of Man.

Thus, in her inexorable progression, She starts infiltrating the insides of a Croatian castle (Picture 1) or a Belgian swimming pool (2). Then, She grows in the atrium of a Polish palace (5) or a Cuban theater (6) before invading all the space of an Montenegrin castle (8). Then, She guzzles the cross of a Belgian monastery (9) or given more time, imprisons two Taiwanese mansions with her strong roots (14&15).

The next steps? Collapse and burial.

French poet Léo Ferré said “With Time goes, everything goes”. So, when Nature and Time take back what Man abandoned, what will be left of our civilization?