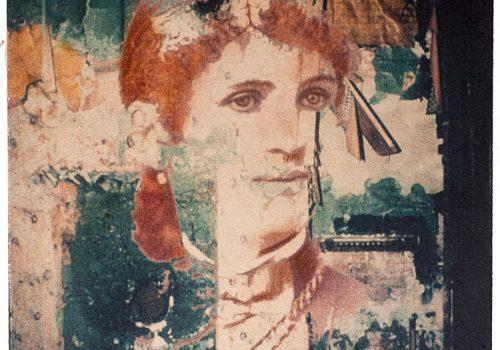 John Reuter’s mixed media images abstract the environments and subjects contained within each frame to such a degree that they could be interpreted as surrealist paintings. Pushed aside are notions of photography as a medium of truth and reality.  The viewer is invited into a realm where the Polaroid is deconstructed and paint, pastels or other images are collaged beneath the emulsion’s surface which is then positioned carefully back into place to assume the classic Polaroid aesthetic.

Reuter explains how his process began; “In the fall of 1975 I entered the MA program at the University of Iowa to study with John Schulze.  My work then was primarily experimental black and white processes from solarization to reticulation and composite printing.  My influences were experimental photographers such as Man Ray, Todd Walker, Herbert Bayer and Jerry Uelsmann.  Equally important were the influences of painters such as Rene Magritte, Max Ernst and Francis Bacon.  At a studio shoot arranged by the students I brought the SX-70 camera in addition to my 35 mm equipment.  A fellow grad student, Rick Valencenti also had an SX-70 camera and told me about a stripping technique he was using to take apart his images, remove some of the emulsion and replace it with paint or collage elements.  That to me was a revelation and I quickly abandoned my surface manipulated SX-70s in favor of what I would refer to as “emulsion stripping”.  In a short time, this became my primary means of image making.  Having combined alternative process photographs with paint for several years prior it was a natural to replace the SX-70 removed sections with acrylic paint, ink drawing and collage elements.  The true beauty of the process is that it was all done from behind, leaving the SX-70 frame intact and from the front it appeared as if it was a normal SX-70 photograph.  For me this was part of the aesthetic, this perfect consumer photographic process generating these surrealist scenes as apparent instant moments.  It fit well with my belief that photography was a mythic medium and that its verisimilitude was an illusion.”

Curator Barbara Hitchcock elaborates on Reuters work;“Shadows and Traces: The Photography of John Reuter” celebrates the artist’s innovative exploration of film technology, photography and painting coupled with his imaginative reinterpretation of people, places and things that have populated the real world. Reuter reinvents the past, stimulates our imagination, and encourages us to enjoy this flight into a familiar, yet somewhat unconventional, alternative universe.

Born in Chicago and raised in California and New York, Reuter went on to receive his Bachelors of art from State University College of New York at Geneseo. He also received his Masters of Arts and Masters of Fine Arts from University of Iowa School of Art and Art History. In 2014 he made a documentary film, ‘Camera Ready: The Polaroid 20×24” project which chronicles the history of the Polaroid. Reuter currently is the director at 20×24 Studio and teaches at Hartford Art School. He has had numerous solo and group exhibitions of his work and taught workshops for the International Center of Photography and Palm Beach Photographic Center. Aperture, Henry Horenstein, the International Polaroid Collection of Cambridge, MA, and more have published Reuter.