Joey Lawrence : We Came From Fire 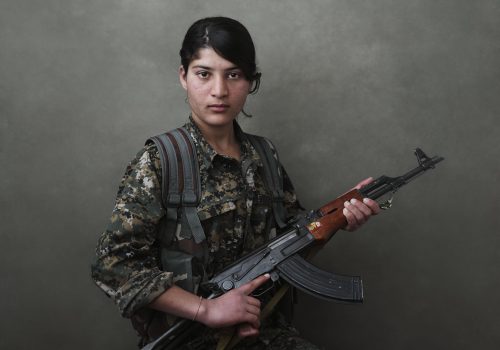 Since March 2015, photographer and author Joey L. has gained unprecedented access to Kurdish guerrilla organizations fighting against ISIS, embedding himself into the chaos of the Iraq and Syrian Civil War on three separate trips. We Came From Fire: Kurdistan’s Armed Struggle Against ISIS provides invaluable insight into a series of conflicts that has been readily obscured by a complex narrative with myriad of warring factions. Three components meld to create an extraordinarily brave and important documentation: Joey’s medium format portrait photography, a written study of the history of the turmoil that led to the rise of armed Kurdish militias, and intimate journal notes of vivid personal experiences while working as a photographer in the war.

The war against ISIS in Iraq and Syria has flooded our daily news with troubling statistics of massacres and mass migrations, yet there are faces and human stories at the heart of the conflict. Joey writes, “From Iraq, one crosses the Tigris River into war-torn Syria, and is catapulted into a worldview crafted by the guerrilla. You are welcomed back by familiar faces wearing a palette of earth tones interrupted by a brightly colored scarf – likely given to them by their mothers. Conversations over cigarettes and tea with much too much sugar often drift to conspiracy theories about the entire world plotting to destroy their cause. Oddly, they begin to make sense. The guerrilla’s secretive hierarchy vanishes due to its compartmentalization, and you find yourself among individual Kurds who left their families with the intention of defending their culture and way of life. We had once again entered the world of the Kurdish guerrilla.”

During his travels, Joey observed ragtag volunteer guerrilla fighters with mysterious links to the outlawed Kurdistan Worker’s Party (PKK) grow into a fully functional army and the US-led coalitions most trusted partner–Syrian Democratic Forces (SDF). With little official government support and just light weapons; brothers, sisters, former university students and refugees that once fled from their homes have now taken up arms together against a common enemy–radical jihadist groups that contest the secular social reformations in Kurdistan.

Joey’s uncanny ability to gain trust and his fearless and open attitude to the unexpected, combined with his genuine love for his subjects and their quest for independence gives We Came from Fire a deeply felt sense of humanity.

Joey Lawrence is a Canadian-born photographer and director based in Brooklyn, New York. Since the age of 18, Joey’s work has been consistently sought out by a number of advertising clients, including National Geographic Channel, U.S. Army, Lavazza, Canon, Jose Cuervo, History Channel, The Government of Abu Dhabi, and many others. His work is regularly seen in magazines, subway advertisements, and billboards.

A firm believer in fostering creativity and fulfillment through personal pursuits, Joey wrote and directed his first scripted film entitled People of the Delta.

Most recently, Joey traveled three times to Iraq and Syria to document the ongoing crisis. He has embedded with multiple sides of the war, including the government-held areas in Damascus, to the Free Syrian Army opposition rebels, and Kurdish fighters of the YPG.

Joey has been listed as one of the “Most Influential Photographers on Social Media”; Complex magazine named him one of the “30 Photographers under 30 to Watch”; and he has been recently featured in London’s National Portrait Gallery as part of the Taylor Wessing Prize exhibition.

Joey Lawrence : We Came From Fire