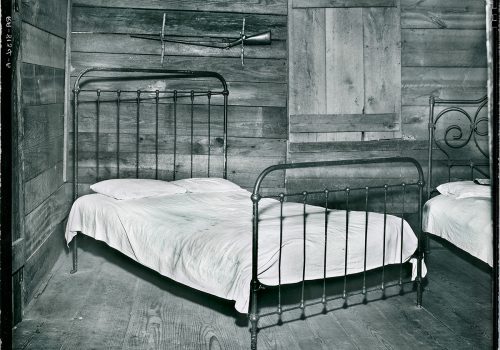 Janet Borden, Inc. presents Interior Influences. Jim Dow, Walker Evans, Fernando Paillet, and Guillermo Srodek-Hart photograph interior views. This exhibition is a study of inspiration, encouragement and guidance; from teachers, mentors and exemplars, as well as cultures, continents and time periods. Four years ago, American photographer Jim Dow and his Argentinian colleague Guillermo Srodek- Hart began to open up old boxes of negatives and prints, with the intention of making a proposal for a small, two person show. To their mutual surprise, they discovered that they had selected many pictures full of unmistakable similarities and meaningful differences that served to initiate dialogues about influence, ideas and intent. This inspired the decision to include two more artists, Fernando Paillet and Walker Evans, two influential artists from earlier decades,

This resulted in a large exhibition, Congruences, held at FOLA, in Buenos Aires in August, 2018. Interior Influences is curated in that spirit, while concentrating on interior spaces. Using large format cameras, all of these artists were able to transcribe and document particular spaces, while showing their individual and particular styles.

Fernando Paillet made many of his most memorable images in February 1922, implying a direct, “subtle style (that) triumphs by disappearing as style,” quite different from the portrait that were the bread and butter of his studio work. Only a few years later, having decided to abandon his ambition of becoming a writer, Walker Evans took up photography, first experimenting with everything from surrealism to self-portraits, soon coming to embrace the same direct, deadpan approach that Paillet employed some 5,000 miles to the south. The resulting images have been described as “poetic, surgical, encyclopedic.” Evans and Paillet were certainly unaware of one another, separated by distance, culture and, to a significant degree, intent.

In the late 1960’s, Jim Dow set out to make photographs in a style that was once reviews being, “dumb, in the honorific sense of the word.” A chance meeting with Walker Evans led him to begin to set his camera in the tripod marks of his master. With the passage of time, the results evolved to reflect his own point of view. At the end of the 20th century, Guillermo Srodek-Hart – who had studied with and then assisted Dow – set out to work in a manner that has been described as, “less ruthlessly classical (with) an edge of nostalgia.” Driven by a desire to document and pay tribute to “the last ones standing,” he sought the descendants (allegorically speaking) of those immigrants who, a century before, Paillet had so carefully photographed in their shops and bars.

With these difference and similarities in mind, Interior Influences seeks to encourage dialogues about social, political and artistic motivations through combinations of images produced by each artist.