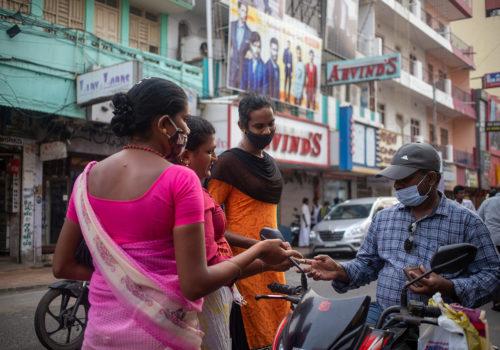 Savitha, Sangeena, Sathana, Geetha, Rossi, Marthula, Srija and Pappima are part of the transgender communities of Pondicherry and Tamil Nadu: the Thirunangais, which in Tamil means “daughters of god”. In southern India, this is what they are called, in reference to the goddess of fertility and chastity, Bahuchara Mata, from whom these people would be the descendants, according to the Hindu religion. These people were mistakenly assigned to a man’s body, better known as “Hijras” in the north of the country.

As a French photojournalist of Indian origin, since I was a child, I have been fascinated by their beauty and the courage with which they defy the expectations of one of the most patriarchal and conservative societies in the world. In September 2021, I decided to meet them and immerse myself in their community for six months in order to bear witness to their marginalized lives. India has recognized the existence of a third gender since 2014 and decriminalized homosexuality four years later. Sign that times are changing, some transgender and intersex personalities have recently made the headlines of the foreign press after having managed to occupy a place in public life, as models and influencers.

But these exceptional trajectories, often the prerogative of the most privileged classes of society, are far from the daily life of the many Tirunangais who offer sexual services in the streets of Pondicherry.

Rejected by their own families, mutilated, beaten, raped and excluded from the labor market, Savitha, Sangeena, Sathana, Geetha, Rossi, Marthula, Srija and Pappima survive thanks to begging, prostitution and the bonds of solidarity that unite their community , both feared and revered, since the Hindu religion give them powers of blessing, healing, and fertility. They thus occupy a paradoxical posture that fascinates everyone.

These women agreed to let me photograph their daily life, between rites of passage, prostitution, begging and hope for a better life.

“My dearest wish is that people stop being afraid of transgender people: after all, I was a man and I became a woman so I can understand both, I have feelings too. I want people to stop seeing us as mentally ill and animals just because we don’t meet the gender norm here. I want people to understand that we are individuals who aspire like everyone else to live their lives and be independent.” summarizes Savitha.

Pondicherry-October 2021.
“Give me some money, you will be blessed!” : Savitha, Sangeena and Sathana do not go unnoticed when they challenge passers-by in the busy streets of Pondicherry. When they meet, some men look away, others approach them to slip a bill into their hands.

Pondicherry-October 2021.
Savitha, 30, has never been able to find a job despite her diploma as a medical analysis technician. “Even if you don’t work, you are beautiful and if you can meet my needs that will be enough,” the head of a laboratory told her during a job interview. She has been begging daily in the streets of Pondicherry since she was 18. This brings her “about 300 to 500 rupees a day” (between 4 and 6 euros).

Pondicherry-October 2021.
In the evening, Savitha blesses a man along the beach, in exchange for 15 rupees (20 euro cents). According to the Hindu religion, transgender people are descendants of the fertility goddess, Bahuchara Mata.

Tamil Nadu, Ariyankuppam-November 2021.
She shows me her transgender certificate. Dated 2016, it formalizes the transition of Mr. Balamurugan into a transgender woman, taking the first name of Savitha. It provides an electoral card and an identity card. In April 2014, India’s Supreme Court officially recognized the existence of a third gender, neither male nor female, for the benefit of a transgender population estimated between half a million and a million people. But, “Apart from getting a new name administratively, I have no rights, I cannot work or be respected as a human being.”

Tamil Nadu, Ariyankuppam-November 2021.
Savitha (left) and her mother Amahi (53). Her mother kicked her out of the house when she was 11 and asked her to come back to live with her when she was 19, when she learned that her son had changed his gender and that she was into prostitution.

Tamil Nadu, Pondicherry-December 2021.
The private Mahatma Gandhi Hospital in Pondicherry includes a specialized clinic for transgender people which has registered over 500 patients from 16 different states of India and performed over 300 surgeries.

Tamil Nadu, Ariyankuppam-December 2021. A month after fleeing her family’s home, Marthula dares to show her face uncovered, on the beach of Ariyankuppam, in the southern suburbs of Pondicherry. Here, she is disguised as Ardhanarishvara, an androgynous deity who unites Shiva (on the right side) and Parvati (on the left side) within a single body. This image symbolizes the ambivalence of the divine nature, feminine and masculine at the same time, neither man nor woman, because at the origin of all things, transcending gender distinctions.

Tamil Nadu, Pondicherry-October 2021. Geetha, 35, finally shows herself in her woman’s outfit during Nirvan. Nirvan is one of the most important rituals in the life of a Tirunangai. The Hindu Tirunangais say that if they are born with a female soul in a male body, Goddess Bahuchara comes in their dream and asks them to emasculate themselves and become Tirunangai or they will be reborn like this for the rest of their 7 lives. Nirvan is considered a rebirth. Before performing her vaginoplasty, she underwent a forced marriage, and had a wife and a son.

Tamil Nadu, Ariyankuppam-December 2021.
Savitha invited the inhabitants of her neighborhood to come and commemorate the ten years of her operation at her home, in Ariyankuppam, in the southern suburbs of Pondicherry.

Tamil Nadu, Cuddalore-February 2022.
Srija receives a client who comes to see her “two to three times a month” in her room.

Tamil Nadu, Madukkarai-December 2021.
Savitha followed this regular customer to Madukkarai, about 400 kilometers west of Pondicherry: “He treats me well, he is nice to me, so I charge him less when I need money”. This time, she asks him only 300 rupees (4 euros), well below her usual rate of 1,500 rupees (18 euros) per pass.

Tamil Nadu, Ariyankuppam-February 2022.
62-year-old Pappima gets out of breath quickly when she speaks. AIDS is wreaking havoc in the community. She found out she had HIV 12 years ago, after working as a prostitute most of her life. Now she has found a job as a house keeper in Ariyankuppam. “I started as a teenager, around 15 years old. Before that, my father abused me for years. You don’t have to be Thirunangai, it’s too hard. In my next life, I would like to be able to be like everyone else, be a doctor and help people for example.”

Tamil Nadu-February 2022.
About twenty Thirunangais live together in this brothel on the outskirts of Pondicherry.

Tamil Nadu, Ariyankuppam-November 2021.
Savitha dreams of changing her life and quitting prostitution: ‘My dearest wish is for people to stop being afraid of transgender people: after all, I was a man and I became a woman so I can understand both, I also have feelings. I want people to stop seeing us as mental patients and animals, because we don’t meet the existing gender norm here. I want people to understand that we are individuals who aspire like everyone else to live their lives and be independent. »