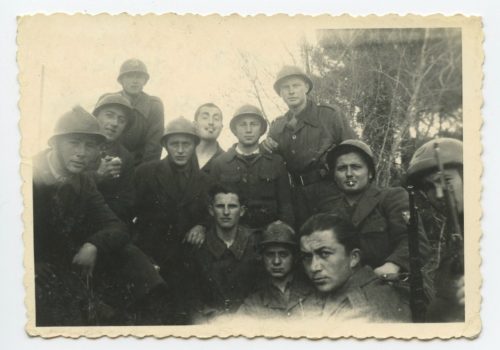 I think that it is a great idea. Putting together a self published book of the old family photos that only exist in vintage prints.
No more countless boxes that end up forgotten and in the trash.
This is what Jean-Jacques Moles has just done with this book Geneviève and Raymond.
Here is his text:

The cookie box
It was perched on a shelf, in their garage, at 968 route des vergers, in Moissac.
Rusty. Like forgotten, a lost story, from a bygone era.
Once the rubber band that held the lid was removed, one could discover its contents: the correspondence of an entire life.
So many proofs of complicity, friendship, family solidarity, love.
A treasure.
A testimony to the heart of the 20th century.
Letters carefully sent to the address of Geneviève and Raymond Moles.
Their families, friends or colleagues tell their rural daily life or the news of the city and ask for news.
Our two parents suddenly talk to us, tell us about the sorrows and joys of their life in the countryside. They yearn, hope, declare their feelings.
These testimonies shed light on certain photographs.
We see characters from a past time, rooted in their land, prey to the disorders of war, or in professional exile, from the peasant condition to the civil service.
They are concerned about sartorial elegance, especially during family ceremonies. Parties, often dancing, vacations, often at sea, become new rituals and open the doors to dreams.
These photographs, I patiently collected them in their two respective families.
It was a process rich in encounters and strong in emotions.
I was received with plastic pockets filled with random shots, with yellowed albums, with bundles of photographs previously selected for me, …
We watched them together, we evoked memories, we recreated family ties.
We found each other: nephew, uncle, aunt, cousin, cousin,…
These simple and complicit moments have nourished the realization of the work.
The violence of mourning, the discomfort of loss were softened.
In this collection of memories lived or unknown, vivid or erased, notorious or secret, everyone has brought their share to make it a shared book, their book.
Jean Jacques Moles

Genevieve and Raymond
A book of photographs in homage to Geneviève and Raymond Moles, For family use.
A second edition for a wider audience is under consideration.