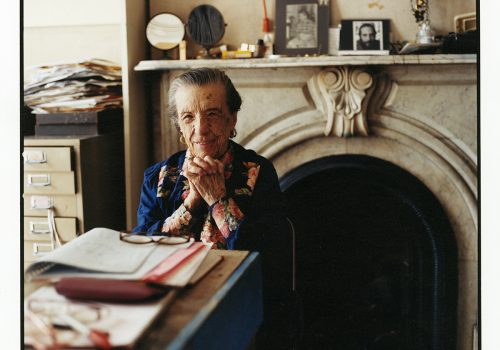 She is one of the major artistic figures of the 20th century, and although she has not ceased to place her emotions, sexual drive and personal life in her works, Louise Bourgeois was not always at first easy to meet. It was necessary to prove your credential to obtain the precious sesame. After a first meeting in 1994 in her studio in Brooklyn, the photographer Jean-Francois Jaussaud is finally dubbed by the artist. This incredible meeting will allow Jean-Francois to make during eleven years rare images that show the artist in her intimacy at the heart of her work.

Tell us about your meeting with Louise Bourgeois?

I met Louise in the winter of 1994, the first meeting was in her office in the Brooklyn workshop a former garment factory at 475 Dean Street. I went through a “questioning” a little strange and fun, an almost administrative questionnaire, date of birth, address, contact details … She noted everything meticulously in a small notebook … Very quickly she realized that I lived near Choisy le Roi, the city where she had spent part of her childhood, she took a great pleasure in making me talk about the city. She asked me to go see the place where her house was at the time and tell her about it at our next meeting. She gave me an appointment in April 1995 for our first photo shoot. One condition: I want to see all the photos and if they do not please me I destroy!

She let only a few people in her privacy, how did you manage to convince her to let you do this work?

April 1995, I arrived at Brooklyn studio, I hired an American assistant to give me a hand because I carried lighting equipment (the studio was divided into spaces bathed in a beautiful natural light and others were just lit by simple light bulbs). My assistant’s name was Robert Miller, I present him, it made Louise laugh a lot, it was also the name of her gallerist! Louise had prepared, specially dressed for her portrait, she was very neat and flirtatious, not in the usual outfit she wore to work in the studio, when she wore layers of worn out clothing, often covered in a blue or gray blouse. First photo, I’m ready, I chose this sculpture “Eyes” two big granite balls that are more like breasts. The sculpture stands in the middle of the studio, Louise is very happy, she is facing the camera, a few words, she turns suddenly, hides her face, suddenly rage, told me that it is not acceptable I attack her, “steal her image”, she goes to take refuge in her office … Stupor, I think that all is finished, I have only to repack my material and return to Paris. A few minutes pass, Louise comes back, with a big smile, she shoves a white cap on her head, placed both hands on the granite blocks: “It’s good, now you can go, I’m protected.”

Two fantastic days in the workshop, I am completely free, I observe, I imbibe, I breathe the place. Louise comes to see me from time to time or it is me who asks for a new portrait, she works, receives, I feel only joy. Two days later, I go to the Chelsea’s little house, 347W 20th Street, I promised to show her everything. B & W contact sheets, color slides, I spread everything on her table, she looks carefully, smiles … “It’s good, you can come back whenever you want”.

You followed her for 11 years, what were the most memorable moments?

Whenever I came to take pictures, I joined her in the morning at 9am we always spent a few moments to discuss before I got to work, she told me about her memories of France and the artists she had known . Beautiful moments of sharing.

Who was she behind the great artist we know?

A woman totally inhabited by her art, there was no difference between her life and her creation. One of her sentences that sums it up perfectly: “Art is a guaranty of sanity”

What seduced the eye of the photographer that you are at the same time of the woman’s and of the artist’s?

In the woman and in the artist the total involvement in her art, she was “Inhabited”. Every time I crossed the threshold of her house I also returned to her, so much was this place incarnated.

How were your photographic sessions?

When I was in New York, I called in the morning before 9am to be sure that she picked up the phone (because her assistant arrived at 9am). Sometimes she was not willing, other times she told me you can come. I arrived then around 10am, she or her assistant opened the door. We then spent a few moments chatting at her desk, then she let me go around the house all day. Joining me from time to time to see me working or for a portrait. I was totally free.

Looking back, did you manage to show her what you perceived from her?

My last meeting with Louise took place in 2006. I had planned to go to New York at the beginning of June 2010, to go and greet her, she passed on Monday, May 31st …. But, I visit her again very often …