Jean-Claude Gautrand – The Historian of Arles 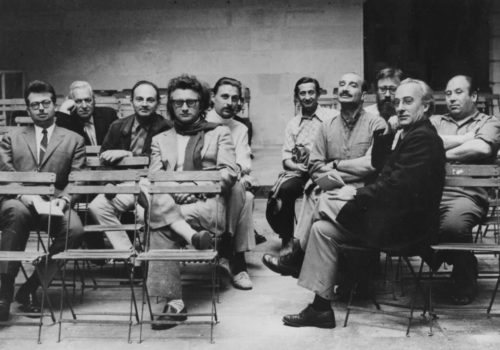 When a small group of enthusiasts, gathered since the day before in the city of Alyscamps, entered the Réattu Museum in the middle of the afternoon of July 1, 1970 to discover what most of them never  had never seen before, a collection of original prints of Edward Weston, none of them doubted that was the beginning of an adventure that would transform the French photographic landscape and make Arles this magical place, the future capital of world photography.

Grafted on the multidisciplinary festival of Arles – one of the oldest in France – the photography would generate what the official program already qualified as feast of the image. Modest that year but already prestigious – the exhibition Weston, composed of originalprints, partly lent, partly offered by Jerome Hill, is the proof of that – the place of photography will be, for three days, multiple and alive. This initiative, unprecedented in France, was born from the common idea of ​​two Arlesians who had newly joined the Festival Committee, Lucien Clergue and Jean Maurice Rouquette, curator of the Musée Réattu, and an adopted Arlesian Michel Tournier writer , also producer with Albert Plécy of the television series “Chambre noire”. Three men of images, the first famous photographer, the second curator of the only French museum to present permanently original photographic prints of the great contemporary photographers, the third director of the only televised show dedicated to the masters of the camera, will thus unite their efforts to, with the help of some friends of the Committee including its president Paul Geniet, show that despite the general indifference of the public authorities of the moment, photography existed with sufficient force to be able to generate a current of interest and effective emotions. Admittedly, unanimity is not immediate … These projects make some people smile for whom “photography is not a show” and who say that this kind of confrontation between authors and their audience “does not lend itself to the outdoors and ultimately interests only a few people.

And yet! By the hot and heavy evening of July 2, around 9 pm, the wedding hall of the City Hall of Arles had an unusual animation. A hundred people installed in the humidity of a very warm evening prepared to attend the first and only public evening. At the summit meeting, three leading characters from the French photography of the moment: Denis Brihat, Provençal ascetic, Jean Philippe Charbonnier, caustic and truculent, and Jean Pierre Sudre, a true modern alchemist, presented by the brilliant Michel Tournier. Around Clergue, a handful of photographers from all over France came to bring their friendship and support to this risky initiative. These activists, these image activists who responded to his call formed a small starting nucleus that, welded by friendly ties, will live the first stage of an amazing adventure. For the first time, images have a face and a carnal contact uniting actors and spectators. In an overheated atmosphere and strangely magnetized, a thunder of applause ended the projection of the last slide.

Enthusiastic friends then decided to write to the President of the Republic, Georges Pompidou, asking him to offer photography the place it rightly claimed. Michel Tournier wrote the text co-signed by all.

Still confidential, drowned in a varied program that combines Comédie Française and recital Léo Ferré, Cocarde d’Or and Warsaw Philharmonic Orchestra, ignored of course by the national press, an embryo has just come to life on the road to holidays and festivals in the South of France. It is promising and will prove that with small means, a great power of work and a lot of passion, photography is able to break the anonymity of which it suffered terribly in the hexagon.

The graft has taken well, the following summer, the small band, enlarged, made a first leap: the evening of confrontation between two photographers Edouard Boubat and Lucien Clergue, this time, in the interior courtyard of the Réattu Museum. In the superb, almost religious decor of this beautiful, quiet space barely disturbed by the silent flight of a few bats, one hundred and fifty people attend the masterfully presented projection of Michel Tournier. The success confirmed the excellence of the formula: to install a living and personified photographer in the middle of a public delighted to discover at the same time the work, the author and to be able to dialogue with him.

While the Réattu can announce the extraordinary news of the donation of 57 Picasso drawings to the museum, it also opens its doors to a group of young Californian photographers “Visual Dialogue”, whose confrontation with the Free Expression Group, led by Jean Claude Gautrand, whose goal is to challenge the conformist photography of “salons”, is rewarding. Especially since the French group which gathers about twenty photographers presents for the first time in France the guests of honor prestigious elsewhere but unknown here: Jerry Uelsmann, Paul Caponigro, Heinz Hajek-Halke .. A meeting of pure visual creators which proves the open-mindedness of the organizers.

France Culture, listening to the festival, lends its antenna to photography. Another innovation is the creation of a photographic book prize awarded to Bruce Davidson for his book “East 100th Street”. In its communiqué, read by Michel Tournier Prix Goncourt 1970, the jury concludes by regretting the poverty of the participation of French publishers to this confrontation.

It is in the same atmosphere of celebration and joy that in the crowded courtyard of the Reattu, a 39-year-old teenager, Jean-Loup Sieff, meets a happy young man of 78, Jacques-Henri Lartigue. Elegance and sophistication in the face of fresh and dynamic naivety. Lartigue dazzles, twirls, and real rocket carrier, brings to the zenith this evening of the festival. The humor, the liveliness, the memory of the one who, as early as 1904, barely ten years old, was already photographing the beautiful ladies of the Bois de Boulogne. His joie de vivre is communicative. How not to share with him this great burst of astonished laughter when, during the opening of the exhibition Atget, he suddenly affirms to recognize himself with his brother on one of the images of the old Parisian photographer made at the Tuileries Guignol in 1900 This success of Lartigue seems like a snub to the administration of the National Library, which still refuses to grant Jean Claude Lemagny the premises and means sufficient to carry out the first Parisian retrospective of one of the greatest photographers of which the exhibitions are multiplying in Japan and the USA! On the program of exhibitions, Davidson winner of the 1971 book prize, Hiro super color technician presented by the magazine Zoom and Lucien Clergue who hangs his photographs at the Montmajour Abbey to the dismay of the guardian, outraged that nudes, were- they, those of Aphrodite, dare to penetrate into this holy place.

The Rencontres already mark the minds sufficiently and drain enough interesting personalities for a symposium, “Photography and the Museum”, to be organized. For three days, photographers and curators will attempt to draw up a summary report on the action to be taken to create a real photographic museology which, apart from the Réattu Museum where a collection of photographs gathered since 1965 and of course at the National Library , does not exist in France.

” Photography,” said one of the participants, “is the new chance for museums to bring back the life that has left them.” Must we admit to the Museum Photography or Photographers?

The first point of view is that of the curators working, on the documentation of an era. The second is that of photographers who think that only the didactic side of the museum can break the force of inertia isolating photography. “We must first of all recognize the social value of the artist’s work,” says J. Rouquette, without neglecting the necessary photographic formation of the curators “. This colloquium, very followed, ends with conclusions written jointly by participants wishing to meet here to talk more specifically about these problems of teaching photography.

The growth and importance of the Arles Festival’s Photographic Days are confirmed: an even larger audience, the presence of some of the most renowned photographers, the quality and reputation of the personalities present at the conference make the action begins to bear fruit! Even if some reservations are still heard in the photographic microcosm.

Never mind, the Photographic Meetings of the Festival of Arles 73 move to a higher speed. They are international and the budget reaches 40,000 Francs (!). Jean Claude Lemagny presents the first American guests: three women photographers Immogen Cunningham who has just turned 90, Judy Dater and Linda Connor as well as Jack Welpott, Jerry Uelsmann and Lee Friedlander who unleashes passions by his arrogance, his verbal pirouettes as much as by his disconcerting images full of inventions. The court of the Reattu is now too small to accommodate the crowd of young and not-so-young spectators who came in large numbers on the second evening when the inexhaustible Fulvio Roiter the Venetian “great specialist in color” and Jean Dieuzaide “the complete athlete of photography “as Michel Tournier presents it. An evening that closes these 4th Rencontres in apotheosis. In terms of exhibitions, the magazine “Camera” presents, in agreement with Photokina, the set “Sequences”, a new stewardship well illustrated by Duane Michals, which is not unanimously received. Paul Strand, winner of last year’s book prize, and Edward Curtis’ “North American Indians”, on the other hand, are praised.