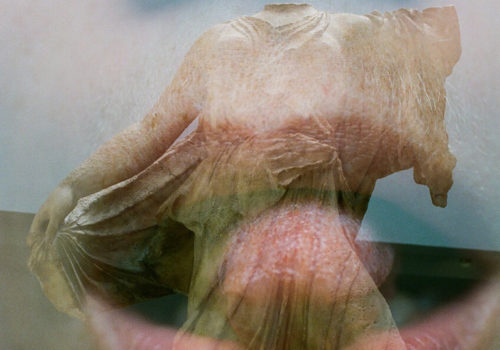 “I don’t know who made all these different sculptures, I don’t remember where exactly I found each one […] I shot two rolls […] One in colour and one in black and white.
And then I went home and put the exposed rolls back in my camera and shot them again against my body in the living room. I was looking to be surprised. I wanted it to blend and merge in ways I couldn’t have thought of myself. I wanted to not know for sure when they ended and I began.
Most of the photos were […] not very good. But sometimes something would happen that fascinated me deeply. Enough times and deeply enough for me to be curious to continue.”

“So many interesting accidents had happened. But which ones are mine to put my name on? Which ones are asking me to return to them over and over? Which ones speak the clearest to each other? And in which order do they wish to be told? How long can I work with them before I grow blind to them? Will I ever get as sensitive to them again as I was the first time I saw them? How do I feel? Am I ok to be this naked out in the world? And…
Will you like it? Will it touch you?”

About Lina Scheynius
Lina Scheynius lives in London. Born in 1981, she left Sweden at 19 to become a model. In 2002, she began the intimate and delicate photographic work that she pursues today. She works for magazines, regularly publishes photo books and has already had several major monographic exhibitions. In 2012, she was guest of honor of Die ZEIT, for a carte blanche every week for one year. In 2019 Jean Boîte Éditions published the complete box set which brings together all her photographic self-published books from 2008 to 2019.