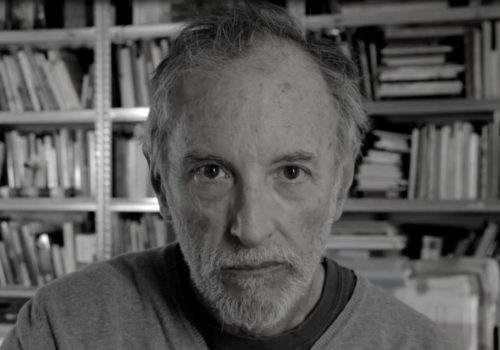 After the documentaries devoted to Frank Horvat, George Tourdjman and Satoshi Saikusa, Philippe Abergel‘s “Portrait of a Photographer” series returns with a fourth episode devoted to the Spanish photographer Javier Vallhonrat. Abergel followed him at home in Madrid and in the Spanish high mountains.

Born in Madrid in 1953, Javier Vallhonrat grew up under Franco and lived in his youth, his first artistic gestures with the implosion of Franco’s dictatorship. “Music, fashion and cinema were universes with opened doors,” he told Philippe Abergel. A graduate of the Fine Arts School in Madrid, he worked in Rome as the assistant of Italian photographer Gerardo Moschioni and presented personal works to major Italian magazines such as Vogue, going against the usual fashion clichés of the time. His early works were based on highly composed stagings.

In 1991 with Autogrammas and in 1993-1994 with Objetos Precarios, Vallhonrat questionned through simple means (“light […], time […], his body”), the idea of image, and thus the essence of photography. “The notion of space”, the geometry of the bodies conditioned by the performance as well as by the gaze induce a psychological in the artist.

The legacy of conceptual artists of the 1970s such as Richard Long, Dennis Oppenheim and Vito Acconci marked a new stage in his work. Vallhonrat used the camera to record his actions. Therefore, the photographic language served the performative work. The artist’s actions addressed the idea of habitat, of place, of the relationship between a space and one’s own body.

From 2011 to 2015, his series Interacciones gave a contemplative and personal dimension to his work. Walking since his childhood in high and low mountains over long distances, this series symbolized the fragility of human existence in the face of conditions and environments that easily crush it. It also underlines the artist tast for neutral colors, soft tones and strong contrasts. His work on bivouacs and natural refuges is of a great simplicity: “how to tell the story of a whole night? In the photographic language, it is really impossible” was his starting question. And yet, Vallhonrat photography goes beyond the narrow frame of photographic time.

“I have been a freelance photographer living in Paris for 35 years now. I have worked on assignment for major newspapers and directed advertising campaigns in France and abroad. I have been collaborating for about ten years with lots of publishing houses, and have to my credit 13 fine-arts books on Heritage and crafts (L’Elysée, Quai d’Orsay, Palais Farnese, Palais Thott…).Teaching photography at the EFET Paris XII School and at the École des Gobelins led me to think on transmission issue.

This series of documentaries is entitled Portrait of a Photographer. It was born from this desire to pass on to the younger generations, and to photography lovers, what the life of a great photographer is, to have a 26′ lenght his analysis on his profession, on his pictures and on the photographic idiom.