Jane Evelyn Atwood : The Story Of An Exhibition At The Filature, Mulhouse 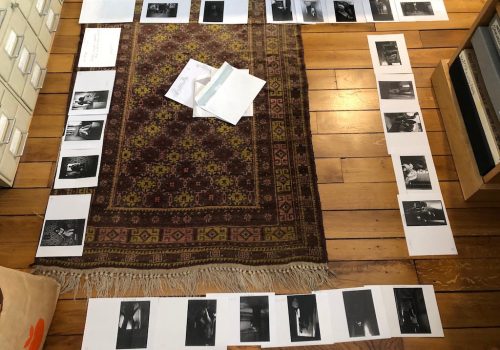 Living in France since 1971, Jane Evelyn Atwood is known for her series on the prostitutes of the Parisian streets, between Rue des Lombards and the alleys of Pigalle (Histoires de prostitution, 1976-1979), for the crying intimacy of Jean-Louis’ last moments (Vivre et mourir du Sida, 1987) and for her long-standing documentation of the precarious conditions of incarceration in women’s prisons all around the world.

She sent us a story about  her exhibition’s installationn in Mulhouse, a few days before the city was one of the most affected in France by the Covid-19 epidemic.

“I arrive in Mulhouse on February 25th, where I stay in a large and comfortable hotel.

Every morning I have breakfast with a small crowd, and three times that week I have dinner in the same dining room, always with a lot of people. At the end of the week, buses arrive, filled with Carnival attendees. Thursday they are in the hotel lobby, already in disguise.

The next day I go to the Filature to unwrap the many packages of framed photos that make up my Retrospective, Jane Evelyn Atwood, Photographs: 1976 – 2010.

I lay out the photos on the floor, in their respective places, in the different sections that make up the enormous Gallery. Emmanuelle had sent me a floor plan and I’d already established an order on the floor of my office in Paris.

Marc and Andrej, the guys who will actually hang the pictures, arrive in the afternoon and we begin to work together.

The exhibition is the same one that showed at the Maison Européenne de la Photo in 2011, excluding the photos of Haiti and the landmine series. There isn’t room for everything, and I want to add 36 photos from Pigalle People. It’s easy to do, because I can use the same tiny work prints, each on a page of my little black notebooks, that were exhibited in Arles for the Rencontres de la Photographie in 2018 and then at the Maison de Robert Doisneau in the fall of 2019. A long wall, opposite the section I call Miscellaneous, can perfectly hold two rows of the framed pages, one next to the other.

The hanging takes five days. There are 190 pictures. The section on AIDS, with the photos of Jean-Louis, is hell to hang. Pigalle, too, takes an enormous amount of time.  But Marc and Andrej are great: meticulous, efficient and very kind. As we progress, they study the images more and more closely and they ask more and more questions.  We talk a lot about prison, AIDS and of course, prostitution–even the series on the blind evokes their curiosity. They are genuinely interested in what they’re seeing.

The new Director, André Benoît, comes by and walks through the entire show. I photograph him as he stands dumbfounded in front of the photo of an inmate giving birth in handcuffs.

The hotel empties out on the weekend. The Carnival is cancelled – A first!  I spend Saturday and Sunday photographing the trans who Emmanuelle had introduced me to the year before.

On Monday, March 2nd, the texts arrive from the printer, Prevel Signalisation. Laurent and Emmanuelle have finished the captions and we place them where they belong, one under each photo. I arrange all the objects, drawings and gifts that the prisoners have given me in two glass cases in the prison section of the show. In the Jean-Louis case I put a selection of the most important publications–magazines and newspapers that ran the story–and the letter from Brigitte, a 17-year-old high school student who wrote and told me she finally understood what AIDS was all about after she saw our story in Paris Match. I go through the whole show with Dominique who, teetering at the top of his ladder, adjusts the lights for every image.

On Tuesday, March 3rd, a team from the television channel, ARTE, arrives. We spend the morning together, in the exhibition, to film and interview. I have already done many interviews for the press, but ARTE wants to film a sequence that they’ll show as part of their evening news hour. At noon we all eat together, with others from the Filature, in the Museum café, where we often eat during the week. The rest of the time we go to small restaurants in town, where there is always a crowd.

Sylvain arrives by train in the afternoon.

Everything is finally ready for the March 3rd opening that very evening. It touches me deeply when Marc and Andrej tell me that no exhibition at the Filature has ever moved them as much as the photos they’ve just hung for me.

Before the opening, there’s a projection of the film, Jane Evelyn Atwood: Fragments d’Un Parcours, by Thomas Goupille and the production company, Cinq26. The auditorium is full: about 100 people. They are 200 at the opening. All the trans I’d photographed on the weekend are there. The Director makes a beautiful speech. Everybody kisses and hugs; it is a lot of fun.

I go back to the Filature the next morning, March 4th, to make a quick video, as I often do when I exhibit–not to show to the public, but for me, as a record of the photo order on the walls of a beautiful space.

Later, when we leave the hotel to take our train, the day’s newspapers are on a table in the reception area. “Look!” I call out to Sylvain, “I’m going to take a picture!”  It’s the last picture I will take in Mulhouse.

The Filature closes on March 10th.

Sylvain and I are quarantined in Quimper several days before President Macron quarantines the entire country. With the exception of those who attended the opening, no one has seen the exhibition.

The photos are still there, on the walls in the empty space, hanging in the silence.”