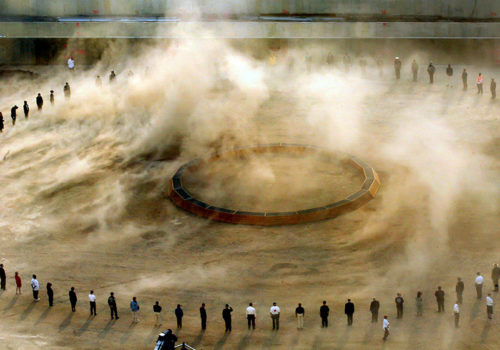 In James Estrin’s exhibition “Observance: Photographs of Spiritual Experience” opening today, sensitivity and technical skill combine to create impactful moments in the world he observes. When thousands of people gathered to commemorate the first anniversary of 9/11, he was assigned one of the least accessible vantage points, yet his extraordinary photograph, “Silence and Dust, 9/11 Memorial, 2002”, was the most powerful (and chilling) image made of the event.

Estrin, a senior staff photographer for the New York Times and founder and co-editor of Lens, the Times’s photography blog; is also a writer for the Times and produces audio and video for nytimes.com. He was part of the team that won a Pulitzer Prize in 2001 for the series “How Race is Lived in America.” Internationally, he has covered the Israeli-Palestinian conflict, photographed the devastation in Haiti following the earthquake, and in 2004, was the first journalist to document an assisted suicide in Oregon.

I had the opportunity to talk with James before the opening of his exhibition:

Elizabeth Avedon: How old were you when you first became interested in photography?

James Estrin: I was 16, and I knew pretty quickly that I wanted to be a photographer.

EA: What direction would you have gone in if you had not become a photojournalist?

James Estrin: Good question. It’s not that I had many skills when I was 22.  I think I would have become a teacher.

EA: You’ve been a New York Times photographer for over two decades. How did you get to this point in time?

James Estrin: I’ve been with the New York Times for 26 years; I was a freelancer for the first four years. I’m now a senior staff photographer, and for the last four and a half years I’ve been the co-editor of the Lens Blog. At first David Dunlap and Josh Haner were co editors and for the last 2 years David Gonzalez has been the Lens co-editor. And there’s our producer Matt McCann who is indispensable.

I went to Hampshire College and the International Center of Photography in the Advanced Studies program. But I thought I should give myself a chance to do something else. I studied some photography at college with Jerry Liebling but mostly I studied anthropology and history.

I’m a big proponent of studying as many things as you can. I think you shouldn’t only study photography or journalism.  That is like majoring in wood shop.

When I left ICP I took a job in Jackson, Mississippi at the Clarion-Ledger, which was a very good paper at that time.  After two years I went to Washington, D.C. to freelance and then to New York where I was a stringer or temporary staff for every paper in NY- Newsday, the Post, the Daily News and finally for the Times for four years. I got hired at the Times January 13th, 1992.

EA: What have been your most challenging assignments?

James Estrin: Among them have been covering the attacks on the World Trade Center and the incursions in Ramallah by Israel in 2002. The story that I did on the making of an American Imam in Brooklyn in 2006 was also quite challenging. And it took me years to arrange to photograph an assisted suicide in Oregon in 2004.

EA: What effect did the experience of the assisted suicide have on you or your work?

James Estrin: It was very difficult to gain people’s trust, get access to people considering employing the suicide law there and attend an actual suicide.
It reaffirmed my belief that if you are honest and open with people – and patient-that you can photograph anything.

It had more of a personal effect then a professional one. It was a very profound experience. It makes me constantly evaluate where I find meaning in life. I did a multi media piece on this. It was 2004 and I didn’t really know what I was doing but the power of the story comes through anyway.

EA: At what point did you begin to incorporate writing with your stories?

James Estrin: I think it was 2003. I always came up with story ideas but had to get a writer to suggest them to word editors to get them done. Of course the Times has many excellent reporters so that usually worked out well. But even when it did, I wasn’t the primary storyteller. I was illustrating someone else’s words. And on occasion their take on the story was somewhat different than mine.

After one experience that didn’t work out so well I decided that I should try it. And I did. For the next few years I wrote a couple of stories a year, and then we started Lens and I dove into the deep end.

EA: Let’s talk about your exhibition “Observance: Photographs of Spiritual Experience.” What was the original force behind creating this work?

James Estrin: I have always been interested in spiritual experience – both photographically and personally. From an early age I thought there was more to life than immediately met the eye.

That’s the challenge for me in these photos. Religious ritual is visually lush and made for photographers. Actual spiritual experience is internal and essentially not visible.

James Estrin: This was a ceremony at Ground Zero one year after 9/11. I was on the 8th floor terrace across the street about as far as could be from what I thought was a good position. I wanted to be down on the ground near the ceremony but I was assigned to the roof. I couldn’t move. I had several very long lenses with me.

At one point something happened in the corner of the site, someone about to walk down the ramp, perhaps the president or the mayor. And photographers started looking that way.

I’m looking the other way and this wind blows and brings up this dust – and its quite remarkable, it feels like the place is alive.