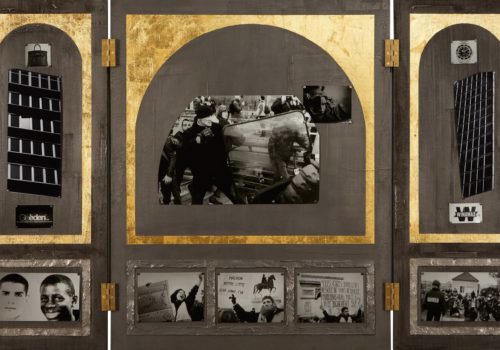 The gallery and shared darkroom Ithaque presents « L’Âge de l’Abondance » (The Age of Profusion), a monographic exhibition by Alexandre Arminjon, scenographed by Sébastien Cherruet, and visible from June 3 to July 31, 2021.

“The Age of Profusion” proposes to illustrate today’s society through its main protagonists, in the language of sacred art. Taking the term iconic literally, Alexandre Arminjon thus raises the images of these characters to the rank of modern icons, adorns them with gold and places them at the center of an assembly whose structure evokes that of a polyptych altarpiece.

Each wooden panel crystallizes the artist’s reflection on contemporary society by cultivating contrasts and opposition, in the desire to sketch a golden legend of our time. The works that make up “The Age of Profusion” are part of a certain tradition. The wooden panels are painted with a mixture of industrial metals – symbolizing the past on which the composition is based – and appear as predella, in the manner of altarpieces. This formal choice, which cites religious art, supported by gold leaf, immediately confers a solemn, almost spiritual dimension to the subjects represented. These are figures that have marked the news, chosen to question the polymorphous abundance of our time.

The form, inspired by polyptych altarpieces, structures the narrative and allows for the confrontation of several time-spaces on the same plane. The artist uses the predella to introduce new protagonists into the portrait, giving a relative meaning to each photograph nailed to the wooden panel. In an almost alchemical gesture, Alexandre Arminjon changes the profane into the sacred by transforming the ephemeral images of current events that flood the internet and social networks into imperishable icons.

He reappropriates these digital images and rephotographs them in black and white with a film camera, thus giving them a tangible existence and posterity. These “iconic” images are articulated on the wooden panels with architectural photography and religious iconography to create contrasts that highlight the artist’s commitment.

Thus, Kim Kardashian and her children become the Holy Family, and play the role of modern-day saints, echoing the admiration – bordering on veneration – that is held for them.