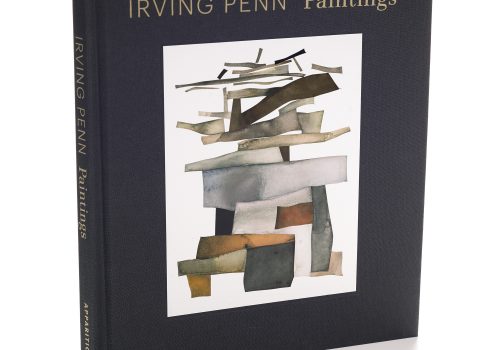 New York – Pace Gallery and Pace/MacGill Gallery presented the first-ever exhibition of paintings by Irving Penn (1917–2009). While internationally renowned for his work as a photographer, Penn initially set out to be a painter and worked in the medium at the beginning and end of his career. Focused on Penn’s paintings from the artist’s final two decades, the exhibition was on view at 32 East 57th Street until October 13, 2018. To coincide with the exhibition, The Irving Penn Foundation, in collaboration with Pace and Pace/MacGill, published a catalogue with the first scholarship on Penn’s painting practice, including essays by writer and curator, David Campany, and Legacy Program Manager at The Irving Penn Foundation, Alexandra Dennett; as well as Afterwords by Arne Glimcher, Pace Gallery Founder, and Peter MacGill, Pace/MacGill Gallery Founder.

Encompassing approximately 30 works drawn from the collection of The Irving Penn Foundation, the exhibition showcased Penn’s mixed-media paintings from the late 1980s through the early 2000s, highlighting the artist’s experimentation with materials, form, and color. Drawing inspiration from leading 20th century figures such as Henri Matisse, Giorgio Morandi, and Fernand Léger, Penn’s textured, often verging on abstract, paintings deviate from the striking and smooth style of his photographs yet share in similar techniques and bold character. Penn’s paintings comprise successive layers, appearing nearly collage-like. In an evolution of his platinum-palladium printing technique for photography, many of Penn’s paintings commenced with the artist creating a drawing in graphite or ink of subjects ranging from mushrooms to mythical creatures, which he would then photograph, enlarge, and print to emphasize his lines’ graphic style. The printed form served as the painting’s foundational structure, over which Penn would apply combinations of watercolor, ink, dry color pigments and gum arabic, sometimes adding sand to achieve greater texture. As this practice evolved in the early 2000s, Penn began to forego the printing step, painting more directly and freely. By surveying the full span of Penn’s decades of painting, the exhibition reveals how his style grew increasingly gestural and fluid over time, embracing all that the medium offers.

In addition to the mixed-media paintings that dominated Penn’s work in that medium, he also produced a small group of Surrealist drawings in the very beginning of his career. The first and only occasion these works were shown publicly was Penn’s 1984 retrospective at the Museum of Modern Art, where a small selection were on view. After this exhibition, the artist again began to paint and draw, over forty years after his earliest experimentations. Then in his seventies and after a prolific and celebrated career in photography, Penn embraced the quiet, solitary and physical experience of painting; writing in his memoir Passage: “Pleased with the new freedom, I found inside myself accumulated forms, enjoyed arbitrary color, the touch of the brush, the flow of pigment, the slowness and privacy.”