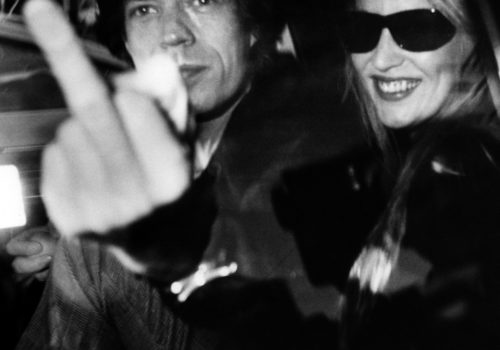 In the ´60s and ´70s, Ron Galella photographed nearly everyone in American popular culture, achieving almost the same level of fame as the stars portrayed.

Ron Galella is considered one of the first paparazzi photographers. The term “paparazzi” goes back to “La Dolce Vita” (1960) by Federico Fellini, who gave the name paparazzo to the photographer in the film. Shooed away everywhere, insulted, threatened, Ron Galella succeeds in photographing celebrities in their everyday life through perseverance and courage. Stars in staged poses do not interest him; rather, Galella searches for the moment of feeling unobserved. “Only the naked truth I want to photograph,” he states in an interview. “The person behind the facade, his energy, his beauty and his greatness that made him a star,” fascinates him.

The “Godfather of Paparazzi” takes advantage of the publicity of the party. In his pictures, he captures the sexual stimulation of the music and gives a rousing account of the excesses of the time. He pays special attention to the legendary Studio 54 in New York, the most famous disco in the world at the time, which opened in 1977 and turned “disco” into a way of life. All social classes mingled there, living by the motto “Sex, Drugs and Rock’n Roll,” and everyone was a star, whether rich, poor, young or old.

With great passion and audacity, Ron Galella begins to photograph Jackie in 1967. In 1972 there is an encounter with consequences: Ron Galella shoots several photos of Jackie and her son John-John in Central Park, ambushing the two from a bush. In the process, he is arrested and, after a court hearing, sentenced to maintain a minimum distance of ten meters from Jackie. Disregarding this several times, he was only able to avoid a prison sentence by agreeing not to photograph her again for the rest of her life.

Ron Galella was born in 1931 in the Bronx/NY and lives in Montville, New Jersey/USA.