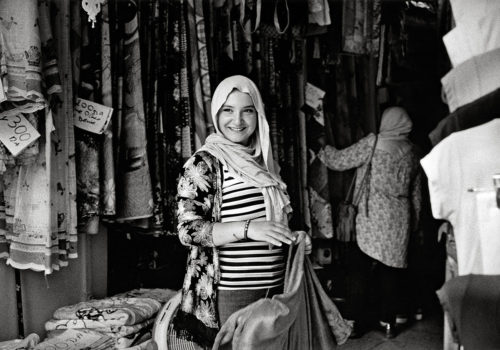 As the 60th anniversary of Algeria’s independence approaches, the exhibition “His eye in my hand. Algeria 1961-2019. Raymond Depardon / Kamel Daoud” offers a unique testimony of Algeria in 1961 then in 2019, through the eyes two great artists: one French, filmmaker and photographer, revisiting his photos of Algeria; the other Algerian, journalist and writer, born in 1970, after the independence of his country.

In 1961, the very young Raymond Depardon produced several photographic reportages in Algiers, then in Évian, during the first negotiations to end the Algerian war. Almost sixty years later, with the desire to publish these photographs from an Algerian perspective, he met Kamel Daoud. A four-handed book project was born, led by Barzakh, the writer’s Algerian publishing house. Raymond Depardon returned to Algeria in 2019 to take a series of photos first in Algiers then in Oran where he met Kamel Daoud.

Barzakh publishing proposed to the Institute of the Arab world to make an exhibition from the book. Its president Jack Lang was immediately seduced: the release of the book will be accompanied by an eponymous, sensitive exhibition, with rare images and unpublished texts which will echo each other while being able to be seen or read separately: two worlds, two independent and yet complementary views that enrich each other…

In rooms enhanced with a gradation of blues evocative of the Mediterranean, through a fluid scenography that facilitates the passage between the two mediums, the visitor navigates between the large texts, suspended like so many installations, and giving transparency which allows to guess the pictures through them. Texts and photographs are framed identically to emphasize their equal importance. “Comets”, flashes inspired by photographs in Kamel Daoud, are treated like so many small works, forming a line on the horizon towards which the gaze tends. Finally, an “exfiltration text” guides the visitor towards the exit of the exhibition.

“I buy a photo, I am offered one, I come across it by chance in a box or on the Internet. So what ? I am, the time of a single and short contemplation, metamorphosed. I have the iris of a cat, that wide dark pupil of a dog or an owl, the inconceivable eye of a jellyfish. I am an eye, and this eye is a moment, and this moment is totality. Technically, I’m in eternity. And yet photography is an interpretation. It is not innocent. Because I am a being of history, lived, recited, repeated. What do I feel, me the decolonized, when I contemplate a picture of this time, of this past which, by injunction, has been decreed contemporary-forever? Who am I in this mirror which should reflect me, and which however erases me forever in the present?” – Kamel Daoud, excerpt from the book His eye in my hand. Algeria 1961-2019 (Barzakh/ Plural Images, 2022)

SON ŒIL DANS MA MAIN – THE BOOK
The publication of Son œil dans ma main is a project led by a tandem of independent publishers in which Raymond Depardon, in consultation with Kamel Daoud, has resolutely decided to trust: Barzakh (Algiers) and Images plurielles (Marseille).