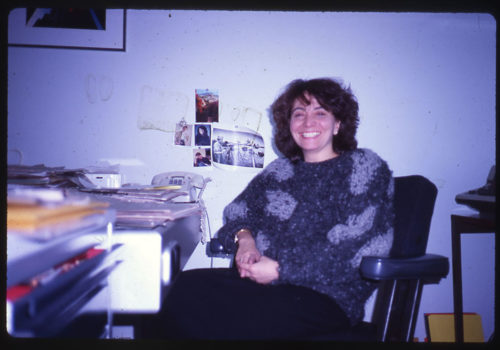 ‘Though she be but little she is fierce’
William Shakespeare
A Midsummer Night’s Dream, Act 3 Scene 2

I always think of this line from A Midsummer Night’s Dream when I think about Michele McNally. Michele was fierce: funny, energetic, loyal, smart, tough, loving, focused, caring, competitive, and a fierce boss and a fierce friend.

Did I say that Michele can also be fiercely devious?

A year or so later we were talking, and I mentioned I’d loved doing some work with my wife, Kathy Ryan, looking at all the archive photos and magazines from The New York Times Magazine for their 100th Anniversary issue. Michele immediately said she had a project she thought I might like, going through the entire Fortune archive and putting together a photo essay on business fashion through the years. I asked her if I’d have to work in the Fortune offices—I still was “not ready for the dark side”—and she responded, “no, I’d be working in the Time/Life Picture Collection in the basement of the Time/Life Building”. Perfect! Down I went into the bowels of the building, and I spent the day starting my dive into the Fortune archive. I was suddenly a kid in a candy store! Pulling out drawers with original prints by Walker Evans, Robert Frank, Margaret Bourke-White, Garry Winogrand, and more. Then I put on gloves and a warm coat and walked into the biggest refrigerator I’d ever seen and started looking at color chromes by Ansel Adams, Dorothea Lange, W. Eugene Smith, Robert Doisneau, Paul Strand and more. I went upstairs at the end of the day with this giant smile on my face and Michele was sitting behind this huge desk and asked me how it went, and I said, “Amazing!!”. I started working there as a freelance editor two weeks later.

As I said, Michele could be fiercely devious, in a good way. I’d been working as a freelancer for almost six months, and I must admit I loved it when the word went around that Time Inc. was going to be cutting back on all freelance workers. I went in to talk to Michele and asked whether I was going to have to leave and she looked at me with this wry smile and said, “I put you on staff over a month ago.”

I worked for Michele for eight years at Fortune. It was the glory days of magazines. Michele hired some of the most amazing people I’ve ever had the joy of working with, Meaghan Looram, Nakyung Han, Mia Diehl, Alix Colow, William Nabers, Josh Haner and more. We were this crazy family and Michele was the mother hen. We worked hard, we partied together, and we put out a magazine with images we were all proud of. I will always maintain that making great images of businesspeople and business settings is probably one of the hardest things to do.

Michele gave us the latitude to work with photographers outside the box and urged us to think outside that same box. I’ll always remember her telling me that part of being a good manager was to hire great people and to give them the freedom to think creatively and push the limits. She then said that her job having given them this freedom was, “to be there to catch them up if they fall.” I’ve never forgotten that advice.

Writing about falling reminds me of dancing with Michele. We had the opportunity to dance many times at Fortune events and at the closing party at Visa Pour l’image. Dancing with Michele was kind of like trying to catch tennis balls being shot at you from tennis machines. She danced with reckless abandon and joy and my job was to make sure she didn’t fall on the dance floor when we were dancing together. We both enjoyed 50’s Swing style dancing with the throws and spins and moves that made it so much fun. I’m sorry I won’t get a chance to catch her again.

Michele could be tough and being on the wrong side of her was scary. I still cringe when I think of sitting in my office at Fortune and hearing her voice coming down the hall yelling “Thode.” One time, when I heard her coming, I jumped up out of my desk and ran down the hallway into the men’s bathroom laughing thinking she’ll never follow me. I was so wrong; she came right in there and gave me a piece of her mind!

Michele and I were partners in the big Fortune Foosball Tournament. (Yes, Fortune had a foosball table and even a pool table. As I said, it was the heyday of magazines.) Michele wasn’t the best foosball player, but what she lacked in skill she made up for in intimidation. She would stare at the person across the table, and they were pretty much out of the game. Writers and editors were especially intimidated. We made it to the finals and unfortunately Meghan Looram stood in front of Michele and she wasn’t scared of her. Being in the photo department we all knew her skill level. We got beat bad, but I don’t think Meaghan had a good story assignment come her way for a month or two after that. It was never a good idea to beat Michele.

I was lucky to have learned many things from Michele. The one thing that I have held dear over all these years is what she told me being a manager meant to her: “When your people look good,” she said, “you look great.” I would say that Michele’s people have looked better than good. They have looked great. And Michele—she looked magnificent.