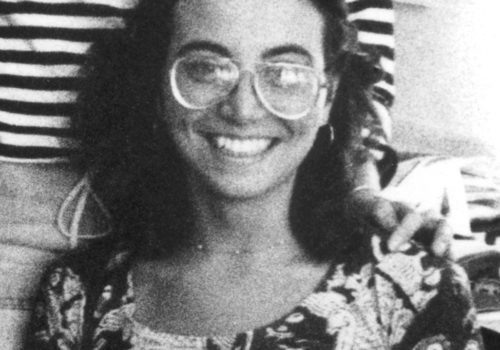 We announced last week the death of Michele McNally. She was one of the great photo editors of our time. The one that transformed a writers newspaper and brought photography and photographers fully into the New York Times.
She was also a very beautiful character.
Tall as 3 apples, an astonishing vocabulary, a seductive gaze, she was a rare blend of charm and determination.
2 people who knew her very well tell us about her: Eliane Laffont, who gave her her first professional chance at Sygma in 1974 and Scott Thode the photographer who met her and worked with her at Fortune from 1996 to 2004.
Jean-Jacques Naudet

Michele’s death fills me with immense sadness and leaves a huge void in my heart. It is impossible for me to recount here all her exploits, I can only share with you the period from the very beginning of her professional life with me… I am talking to you about a time… The Sygma years, the history of photojournalism.

We are in the 70s and the Sygma agency is revolutionizing the world of photojournalism and this revolution is based on several ideas: taking photographers out of anonymity by crediting their names under their photos, giving their titles of nobility to photojournalists who are as much journalists as photographer, let them tell stories and not just seize a moment, establish a co-production between agency and photographers, 50% of the costs, 50% of the sales. And all of it in speculation…

A new “French-style” adventure in photojournalism, imported from France and set up by Jean-Pierre and I in the United States in 1969. New type of agency, new way of working…

Our beginnings were heroic, our work immense, our success was dazzling and immediate.

I needed to find a place and hire a staff. I wanted young people with no experience in a profession that did not exist and that we invented by doing it.

In New York, I met Michele Fiordelisi (she became Michele McNally later). She just had just finished her first summer job as an archivist in the library’s video division at the Brooklyn Public Library, and I don’t know how she arrived at Sygma. I was immediately seduced by her energy and outspokenness. It was 1974 and she was 19 years old. I hired her immediately, her salary was 120 dollars a week, Sygma had its first archivist. But her energy was such that she always demanded more work. I suggested to her to take care of the  sold pictures, stamping them, captioning them, putting them in envelopes and then going to the post office to send them. Everything was done quickly and well, she even went to the post office after work on her way home.

She was a huge worker, her energy was inexhaustible. She did everything perfectly! Her good mood was permanent, Jean-Pierre adored her, he liked her strong voice and her fast flow, he called her “Crazy Eddie”…

I liked this little bit of a woman, I took her near me and taught her how to edit photos and sell them. She was an exceptional and very convincing salesperson. So then she was promoted to sales and I gave her her first client Newsweek. Jim Roehrig, who I had hired a few months before, preferred to deal with celebrities, which we then called the “glamor” department and Michele and I worked in the “news” department. We both had a passion for the news, we were news junkies hanging on to the television which was constantly in the background in the office we shared. We worked as if we had a virtual magazine: we decided which stories to cover, which photographer to send, we would find photographers, accompany them in their work, anticipate the news, edit the photos, caption them, sell them, and catalog them.

Every week we went to the photo department of the magazines to sell the pictures to the editors, we were surrounded by journalists who welcomed us with coffee and beer, the floors of the newsrooms were littered with newspaper clippings. You had to speak loudly to be heard , the clicking of telexes was deafening. The newsrooms smelled of cigarettes, the phones were ringing constantly, the art director would show us the layout with our photos pinned on the walls. A world that no longer exists… A wonderful world, intelligent, full of creative force… No wonder Michele would later want to leave the agency to be part of that world.

The market was at the top, the world was exploding: Chile, the boat people, Vietnam, Lebanon, Poland, the Cold War, the survivors of the Andes, Iran, Mozambique… not to mention the People… Our photographers were awesome, and their photos were taking over the pages of newspapers and magazines. We were so quick in our decisions that often our photos were in the newsroom before the editors had decided to send a photographer from their staff.

Yes, we arrived at a key moment, photography was all-powerful, the world was in turmoil, the press had huge budgets and we had invented the right formula to work with them. But I also want to pay tribute to those who renewed the world of photojournalism in the 70s and Michele is one of them. It was at Sygma that Michele learned what she will use for the rest of her brilliant career and I am honored to have been her mentor but Michele had qualities in her that made her who she was, and these qualities are hers, I did not give her. Her curiosity, compassionate stewardship, passion and hard work that elevated photojournalism even higher at The New York Times.

It is Michele’s lifelong and contagious enthusiasm and passion for this craft that I will always remember. She was a giant in a tiny body.