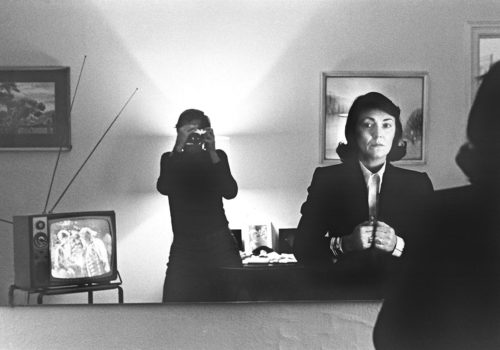 She was born June Browne in Melbourne, Australia, in 1923. After her school years, she trained as an actress and had numerous engagements under the pseudonym June Brunell. In 1947, she met Helmut Newton, who had just set up a photo studio in Melbourne; they married one year later. In 1956, she was awarded Australia’s Erik Kuttner Award for best theater actress. That same year, the Newtons moved to London, where Helmut worked for British Vogue. In 1961, they moved to Paris, where Helmut had been offered a permanent position at French Vogue.

June Newton was unable to continue her acting career in France, and in 1970 she took up photography herself. When her husband briefly fell ill, she stepped in to take his place for a commercial photo shoot – from then on June worked on her own photographic career under the pseudonym Alice Springs. In the early 1970s, she shot several campaigns for the French hairstylist Jean Louis David; the images appeared as full-page ads in renowned fashion magazines. The first Alice Springs motif appeared on the cover of the French magazine Elle in 1974 and her images repeatedly featured in the editorials of the fashion magazines Vogue, Marie Claire, and Nova.

She also received commercial assignments for pharmaceutical ads by Jose Alvarez, director of a creative agency in Paris at the time. Later, as head of Editions du Regard, Alvarez published her first book of portraits in 1983. From the mid­ seventies onwards, Alice Springs shot numerous portraits for magazines such as Egoiste, Interview, and Vanity Fair. The roster of artists, actors, and musicians she portrayed over the next 40 years reads like a who’s who of the international cultural scene on both sides of the Atlantic. Alice Springs not only documented celebrities and their nameless contemporaries, but also captured their charisma and aura.

She had a particular eye for faces; sometimes she narrowly framed them in a bust or three-quarter portrait, depicting fellow photographers such as Richard Avedon, Brassaï, and Ralph Gibson, as well as celebrities, including Nicole Kidman , Audrey Hepburn, Dennis Hopper, Billy Wilder, and Claude Chabrol. Different from many of her colleagues she took a more intimate approach, reacting spontaneously in unexpected photographic situations, and allowing her subjects’ individuality to shine through. In doing so, she succeeded in lending new dimensions to familiar faces, free of cliche.

In 1976, she oversaw the publication of White Women as its art director and went on to handle all of Helmut Newton’s later books and exhibition catalogues. Two years later, her own portraits were presented for the first time at a solo show in Amsterdam, which was followed by numerous exhibitions worldwide. In 1981, Helmut and June left Paris and moved to Monaco. They regularly spent their winters in California, living at Chateau Marmont in Los Angeles, where they often met with and photographed Hollywood personalities.

In 1995, the couple made the documentary film Helmut by June for the French television channel Canal+, which was followed three years later by their joint photo book Us and Them, which toured as an exhibition through several countr ies. The special project comprises intimate self-portraits, mutual portraits, and portraits of numerous celebrities, arranged in diptychs juxtaposing the work of Helmut and June (a.k.a. Alice Springs).

In 2004, June published her autobiography Mrs. Newton. That same year, her husband Helmut passed away. Not only would she assume his role as president of the Helmut Newton Foundation, she was also tasked with overseeing the completion of the project Helmut had initiated and for the most part funded: the transformation of a former Prussian military casino near the Zoologischer Garten train station in Berlin into a museum for photography. She took on the challenge with her characteristic willpower so that the Helmut Newton Foundation could open in the summer of 2004. As its president, June Newton became the driving force behind the development of the foundation’s exhibition concept in its first years. Established in cooperation with the Prussian Cultural Heritage Foundation, it is a unique institution worldwide.

The central part of the opening exhibition was Us and Them, supplemented by the last portraits of Helmut Newton, taken on his deathbed in Los Angeles in January 2004. June’s own work was shown in two exhibitions in 2010 and 2016, covering the entire temporary exhibition space. Over the years, the complete works of both Helmut Newton and Alice Springs – all negatives, contact prints, photographic prints, exhibition posters, and publications – have been transferred to the museum in Berlin, where they have been archived and exhibited. On the occasion of June Newton’s 100th birthday in June 2023, the foundation’s director, Matthias Harder, will curate a new major Alice Springs retrospective. The entire team of the Helmut Newton Foundation deeply regrets that June Newton will no longer be able to accompany the process and experience the exhibition.