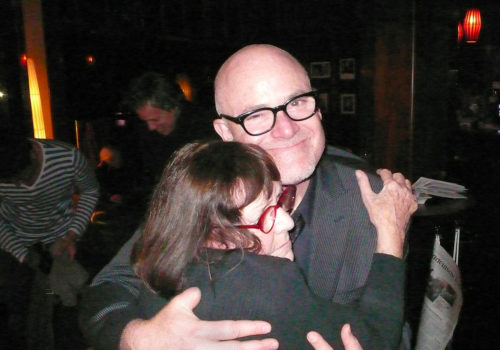 I met June and Helmut in 1978 when I was a student at the Art Center College of Design in Pasadena. If it were not for June and some persistence, I would never had had the opportunity to assist for Helmut in Los Angeles. As the story goes, Mark Arbeit, Just Loomis, and I were camped out in front of their room at the Beverly Hills Hotel. She opened the door, saw us, slammed it shut, and told Helmut “they’re still there!” Helmut opened the door and asked us to return the next morning.

After Helmut’s death, June came up with the title “Three Boys from Pasadena” and curated our show at the Helmut Newton Foundation in Berlin. She wrote, “They assisted him on many occasions, and they were the only three assistants who worked with him and became photographers in their own right…they’ve become his offspring, each with their own voice….It was fitting that I invited them for a group show in Helmut’s Foundation in Berlin on June 3, 2009. It’s unfair that I am writing this piece instead of Helmut, because he would be so proud of them all.”

The show later travelled to Paris, Antwerp, Cologne, New York, and Los Angeles, culminating with a 10-year anniversary show back at the Foundation in 2019.

After Helmut’s death, I remained close to June. We had many lively conversations, lunches, and drinks at the Chateau Marmont in Los Angeles. It was there that she helped me edit my book Holz Hollywood: 30 years of Portraits, her critiques ringing out as loud outbursts on the patio of the Chateau. At one point, she saw a very sexy portrait I had done of Javier Bardem, and she yelled, “Wow, this photo just makes me want to have sex with him!” She told me my photos of Jack Nicholson were better than the ones Helmut had done of him. At times, I was terrified by her fiery personality, but I adored and respected her. She was never afraid to say what she really thought. My son, Joshua, had the opportunity to meet her as well at the Chateau. He was 16 at the time. I think being in her presence was instrumental in his becoming a film director. Eventually she quit making the yearly pilgrimage to LA. We kept in contact, mainly by phone and her beautiful old-school handwritten letters and postcards.

Having her as a host and tour guide in Helmut’s Berlin was an unforgettable experience. June’s elegance and manners reminded me of my grandmother who had lived there before the war. We visited all Helmut’s favorite restaurants, locations, and haunts with her entourage —everything was so steeped in rich history. On the night of our opening in Berlin, we stood with her on the massive red-carpeted staircase at the Helmut Newton Foundation. Unforgettable. Later that night, she hosted an after party at the famed Paris Bar. We were a little late arriving because we wanted to hang out with our fans at the exhibition. I remember thinking, “She won’t notice if we just sneak in,” but when we arrived, her keen eye spotted us, and we were reprimanded for our tardiness. Then, without a beat, she continued to sing us a toast! On another memorable occasion, we shared a small lunch at the elegant Café Einstein Stammhaus where I took her portrait. Another evening at a dinner at the Savoy Hotel, she did a portrait of me as well. I will cherish that forever. We visited Helmut’s grave together, and I thought, one day she’ll join Helmut there—right next to another legend, Marlene Dietrich.

It was a wild ride with a woman who was so much larger than life. The takeaway for me was not only being in her incredible orbit, but invited into the sacred circle of her and Helmut’s friends. There’s an incredible sixth-degree-of-separation with her many friends, editors, colleagues, curators, models and artists. This is what will live on—because without her, I would never have met them. Now every time I see them, I think of her and Helmut—for that I am eternally grateful.