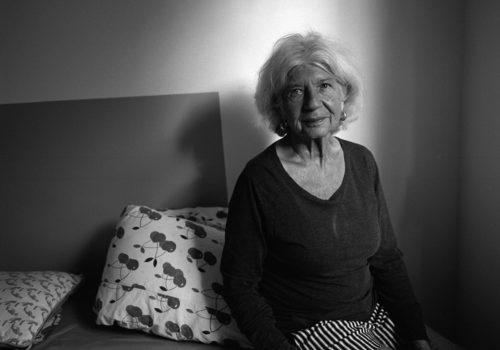 Joan Liftin was a photographer, book editor, director of photo departments, manager of the Magnum library and of the documentary department of  I.C.P. Married to Charles Harbutt, she also formed with him one of the mythical couples in the history of photography.
We had published her pictures when her last book was released on September 23, 2021.
Her friend, the photographer Brigitte Grignet, sent us this portrait and this text.
Jean Jacques Naudet

“Subject doesn’t matter!”. This is how Joan Liftin began her course in 1998 in front of 16 students who had come from all over the world to study documentary photography and photojournalism at the International Center of Photography.

Indeed, for Joan, photography was not so much a medium that tells a story, as the sharing of emotional empathy, the creation of a visceral experience. The images must be deeply personal, they must go beyond what she called “pretty pictures”, well-framed images, beautiful light. It is about rediscovering a perception of the world that takes us back to childhood – when things did not yet have a name. For her, it took very little to make an image. These are everywhere: a crack in a wall, the contents of the fridge, a reflection in the mirror in the morning.

This approach to photography came to her from modern dance, which she had studied at the Connecticut Dance School. “It is impossible to share certain information through dance, it is the same in photography.”

After studying journalism at Ohio State University, Joan joined a modern dance company in Paris in the 1950s, where she also worked for the Fulbright Commission.

Back in New York, she worked for Unicef ​​(“I spoke French and could type very quickly on the machine”) and discovered photography thanks to a colleague, “picture editor”, for whom she wrote the captions. When she fell ill, she took over her job  and took the opportunity to take the photos herself during missions, for example in Haiti.

In 1975, Joan left Unicef ​​and became the director of the Magnum archives in New York for 6 years, to then create Archive, an independent agency which existed for 9 years, with her husband Charles Harbutt, Mary Ellen Mark, Abigail Heyman, Mark Godfrey and Jeff Jacobson.

During this time, she continued her career as an independent photographer: she traveled to Mexico, France, Russia, Eastern Europe, the South of the United States, where she photographed street scenes, landscapes, details – as well as her own family.

She published Drive-Ins in 2004, a set of images taken over 20 years, documenting outdoor movie theaters in the United States, and what it meant for an entire generation. (“It was the only place where certain couples could meet, like gay or mixed couples”).

“Marseille” was released in 2016. For 7 years, Joan returned to the multicultural, working-class city of Marseille for a few weeks a year, walking the streets and photographing daily life. In love with France (“I have loved France since my first steak frites at the Hôtel de Seine in Paris, when I was 23”), she continued to travel with Charlie throughout her life, she crissed-cross the streets of Marseille on her friend Mimi’s Vespa.

Finally, she published a very beautiful memoir in 2018, “Water for Tears’”, which tells us about family, travels, departures and returns, and the pleasure of everyday life – a tender farewell to her husband Charlie and their life together.

Very attached to a certain form of photography book (“a book should not be a compilation of photos, it must have a narrative, a beginning and an end – but perhaps not in that order, as Godard said” ), Joan worked as Picture Editor for many photographers and designed the first edition of Falkland Road (Mary Ellen Mark, 1981), Inheritance (Andrea Stern, 2007), Magnum’s Paris (with Inge Morath, 1981), Departures and Arrivals (Charles Harbutt, 2012).

Her archives have been acquired by the Center for Creative Photography, in Tucson, Arizona (USA).