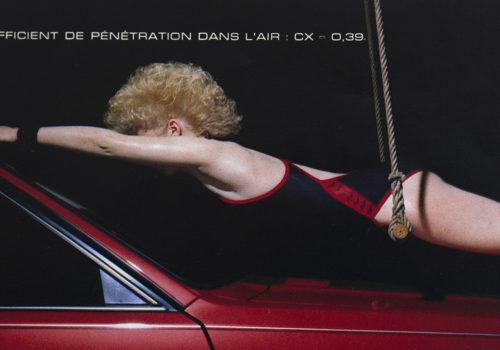 I met Laurence Sackman under unexpected circumstances. An advertising friend had asked me if I could “give a hand” to Laurence because he had just returned to Paris. He had left all his camera equipment in England.

Arriving from his native London to Paris in the 1970s, he very quickly made a remarkable breakthrough in fashion magazines. After an interruption due to health problems, he was determined to resume his career in France. We were in the early 1980s. At the time, Laurence enjoyed an exceptional aura and it was an opportunity for me to see the way of working of a prestigious photographer. I had just started in this profession and, being passionate about cameras, I had already accumulated a quantity of all kinds of formats of which I had in fact never used the full potential.

In this case, Laurence had to carry out an advertising campaign for the car brand Audi. On the one hand, he was a little dubious about my abilities, but on the other, he was reassured to have all the equipment possible for this project.

For my part, I was delighted to help a photographer of this level. I was not going to be disappointed.

A red car on a black background and, above, a trapeze artist in action. A shot full of traps for a photographer. Laurence did not depart from his English phlegm, while I could not help anticipating the difficulties: lighting a car on a black background was already not obvious, highlighting the trapeze artist was no less . Laurence got away with it amazingly with a single light source, a small portable flash that he arranged to illuminate both the car without stray reflections and the model suspended just above. The result was perfect. I was flabbergasted. And there I discovered a true master.

This is how my introduction to high-level photography came about. I had never been an assistant, I had started the profession as an autodidact and I already had a small clientele. Following this meeting with Laurence, I gave up everything and remained his assistant for several years because, with him, everything was exciting.

Sackman took me on an extraordinary adventure.

The more I accompanied him, the more I was enthusiastic about his know-how. It was above all his way of seeing things, his stripped-down, demanding style, that appealed to me. Laurence managed to produce intense images with very few technical means: a white background, a single light source, perfect mastery of the studio, and he produced a magical photo.

He would arrive at my house in the morning and we would take all the camera cases I had and stuff them in the trunk of my car. “Everything but the kitchen sink” he said when I asked him if we weren’t carrying too much equipment. All these cases of Nikon, Hasselblad, large format cameras, flashes, we put them in the rental studio chosen very precisely by Laurence for the ideal dimensions of its cyclorama, and they remained there, in reserve… just in case .

Very quickly, he had unlimited resources, both for castings and for production.

I remember the photographers working in the neighboring studios peeking through the crack in the door to see how Sackman was working. For them, accustomed to complex lighting devices, the surprise was significant. Most were amazed. What ? A star photographer officiating in a studio almost empty of flashes, reflectors, black panels? It was Lawrence. He had found this splendid light of a formidable simplicity, and he concentrated all his creative force in the direction of the model.

As soon as he knew that I had a 20 x 25 format camera, he offered his sponsors to use this imposing yet very restrictive large format. However, his way of lighting had not changed. A single point source without a reflector, in a cyclorama with adequate dimensions to balance the contrast. A bare bulb, which provided “solar” lighting, with very sharp shadows subtly released by the walls of the studio. That was all. And it was incredibly daring. This light gave the images a lightness that highlighted the subject with a fascinating rigor.

The Thierry Mugler collection was photographed in 20 x 25. Thus, as if by magic, Sackman managed to combine the greatest tradition with a caustic modernity. One could not doubt the boldness of his approach, combining an “old-fashioned” process, the large format, with an avant-garde style of lighting surprising by its radicalism.

As soon as he felt the possibility of departing from conventional criteria, he did not hesitate to take advantage of it. Laurence always managed to introduce a touch of eroticism into his photos. After a fashion shoot, he often offered his models to pose naked. The request was accepted by the models who understood and appreciated his artistic approach. The poses were daring without ever an ounce of vulgarity.

But Sackman could surprise in all circumstances.

I remember his very close collaboration with the hairdresser Daniel Harlow, one of his close friends, for whom he had imagined a very strong visual. Harlow had to gather his collaborators and his friends around a large table to create a “last supper” inspired by the great classics paintings. Remi, Laurence’s wife, was in charge of the styling and had found a huge table, so big that we had trouble getting it into the studio. Despite the size and complexity of the scene, Sackman once again deployed his signature lighting: a single bare bulb in a white cyclorama. Obtaining the right expression from fifteen characters in a single photo demonstrated Laurence’s perfect mastery of the most delicate shots. Even today, the image is striking.

During another session with Daniel Harlow, the framing of his portrait is no less so. We only see his spiky hair and his piercing gaze. Everything in this photo demonstrates the photographer’s imaginative force and quest for absolute simplicity. He only sticks to the essentials to produce maximum impact.

Fashion pages and advertising campaigns followed one another and Laurence could become facetious when he did not approve of what was imposed on him. He had a devastating sense of humor and knew how to surprise everyone with radical decisions.

There were sessions for which Laurence, perhaps carried away by his success, revealed all his eccentricity. The psychiatric disorders were accelerated, the disease developed quickly, and the generous facilities that were lavished on him did not help matters. Still, these were extraordinary years. The evidence of his talent was for me a perpetual wonder.

Laurence Sackman is a fugitive photographer. He should be as well known as the most renowned fashion photographers who worked at the same time for the best world magazines such, among others, Guy Bourdin, Helmut Newton, Steve Hiett, Peter Lindbergh, Paolo Roversi. They all admired him. He deserves to be included in the Hall of Fame of this profession, which has done much to advance the art of photography.

He is also one of the fashion photographers who have magnified eroticism without ever leaving the subject of fashion. With Guy Bourdin and Helmut Newton, he never ceased to introduce an important element of eroticism into his work.

Behind the jokes of a real star, Laurence Sackman remains an undisputed master of all aspects of photography. Nothing escaped him. But what is remarkable is above all his perpetual quest for simplicity, one of the most difficult things to obtain. To quote Saint Exupéry “Perfection is achieved, not when there is nothing more to add, but when there is nothing more to take away”. A perfect definition of Laurence’s work. He purified photography to the extreme and this is what made him admired by his colleagues, impressed by his technical rigor and his creative audacity.

When it comes to total mastery of the photographic process, Sackman is a textbook case.

The Beauty of Woman by Alain-René Hardy