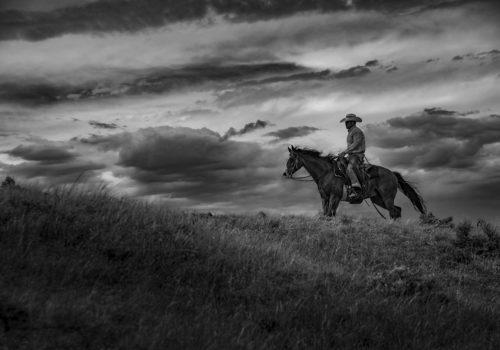 Traveling solo with just her camera, Anouk aims her lens at Wagonhound, one of the largest working ranches in America. At over 300,000 acres, Wagonhound is very much a real-life “Yellowstone”. The men and women cowboys start in the dark and finish as the moon rises herding cattle, branding, training the best quarter horses in the country, and more.

Having earned wide acclaim for her bestselling Wild Horses of Cumberland Island (2017), West: The American Cowboy (2019), and American Cowboys (2021), in Ranchland: Wagonhound (2022), Anouk’s photographs tell a visual story of the rancher and his relationship with the land. The ranch owners, Catherine and Art Nicholas who took the reins in 1999, take the stewardship of the land very seriously, utilizing conservation methods to ensure a balance between the land, livestock, farming, and wildlife to steward the ranch into the future.

“As I continued to travel across the American West, it was a true privilege to photograph the majestic beauty of Wagonhound in Wyoming. And as I was transported here from the hustle and bustle of a fast-paced life at home, I found myself far removed, standing before a vast expanse of ranchland that rises to the Laramie foothills that then ascends to the great Rocky Mountains. Back home in New York I feel empowered, woven into the fabric of a mighty civilization that has conquered the elements and triumphed. However, to stand here at Wagonhound, among breathtaking beauty while exposed to the elements and the grand scale of the American West is to be humbled and reminded of our vulnerability, and survival skills quickly kick in. These instincts are part of everyday life here on the frontier. The land of freedom and independence. The American Dream.” -Anouk Masson Krantz 2022

Set in a large-format book, with contributions from writer and poet Gretel Ehrlich, scholar and historian Jeremy M. Johnston, Ph.D. (his great-great-grandfather, John B. Goff, worked for Buffalo Bill Cody shortly after guiding President Theodore Roosevelt on a hunting trip in northwest Colorado), Don Reeves, Curator & McCasland Chair of Cowboy Culture at the National Cowboy & Western Heritage Museum, and Art Nicholas, these photographs and the stories offer an inspiring new perspective into today’s cowboy/ranching culture and land stewardship of the American West.

Ranchland: Wagonhound is dedicated to the American rancher, who honors and embraces the traditions of the American West while working tirelessly to conserve the land for future generations and maintain its pristine condition. Anouk’s exquisite fine art photography offers a rare window into the cowboy ranching culture and land stewardship of this historic ranch and the breathtaking American West and highlights the rancher’s continued pioneering strength and enduring spirit in today’s contemporary world from an outsider’s perspective.

About Anouk Masson Krantz: International photographer and author Anouk Masson Krantz was born and raised in France. She moved to New York City in the late 1990s and following college worked at Cartier’s North American headquarters. Anouk later studied at the International Center of Photography in NYC and has since developed several notable bodies of work, including Wild Horses of Cumberland Island (2017), West: The American Cowboy (2019), and American Cowboys (2021). Her work has been praised internationally and has appeared in prominent galleries and museums. She is renowned for her large-scale contemporary photography and use of space that defines her elegant, minimalistic style. Ranchland: Wagonhound is Anouk’s fourth book.