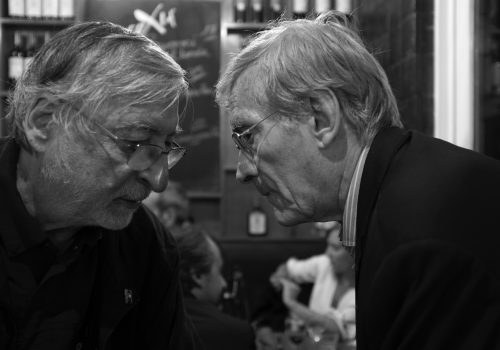 1973. Gamma is in full swing. We are living an incredible adventure, with our new way of reporting our publications are everywhere and we regularly have all the covers of the major international news magazines. Hubert’s idea of ​​sharing costs and revenues equally between photographers and the agency, offers us photographers great freedom of action and great economic comfort. In addition, Hubert is an extraordinary manager with integrity. This is the first time that I have received a check every month, with a statement that tells me the name of the newspaper and for how much and in which country my story was sold. It’s a huge relief I can finally make a living from my job without having to knock on an accountant’s door and beg him for an advance to pay our rent. This is the end of the shady envelopes that no one knew what this money was for. No one had done that before Hubert.

We have become a real business. In addition, the market is favorable to us; we obtain enormous sums in Paris, which at that time was the capital of photojournalism. Eliane opened the New York office and gets gold prizes for our exclusivities and provides guarantees for photographers who go into speculation on subjects of their choice.

World events are in perpetual eruption: Vietnam, the civil wars in Africa, the unrest in Ireland, the revolution in Cuba, and the serial murders in the United States Bob Kennedy, Martin Luther King, and for me correspondent of Gamma at the United States I am in a photographer’s paradise. The subjects abound: women’s liberation, civil rights, farmers’ problems, the oil crisis, world stars passing through New York, the explosion of manners, hippies, drugs, sexual liberation I repeat, I am in a photographer’s paradise because I can photograph in complete freedom, without worrying about my sales and my income.

We all dreamed of becoming our own editors and not being accountable to anyone.

It is to Hubert that we owe this material comfort, I cannot say enough how much the work in speculation suited me. I hated working on commission, I wanted to do my stories without having to worry about writing or selling my photos, just working …

But now the clouds appear, there is mayhem between the partners. I am shocked, we are talking about separation and Hubert announces his departure!

The situation deteriorates and the photographers in Paris call me and ask me what I’m going to do. For me, as for Eliane, there is no hesitation, it is with Hubert that we want to be.

I arrive in Paris, where the two camps are formed. And it is in “commando” that we remove our archives one night from the headquarters in rue Vacquerie where we put all our negatives, contacts and slides in Christian Simonpietri’s car, who will moreover refuse to start in the early hours of the morning…

Eliane will go very far in her decision: as the New York office belongs to her legally, she is the sole master on board and decides to tell the partners that we are leaving with Hubert. Very important decision as the US revenue has become a considerable part of Gamma’s overall revenue. The partners are speechless …

Eliane and Hubert have during the four years of Gamma, worked together in a perfect way. Both hard workers, they call each other every day and always agree on big decisions. Despite some memorable brawls, they still got along perfectly professionally. Impossible for Eliane who can be as difficult and demanding as Hubert to work with anyone else.

It may sound ridiculous today but what was not, was our final decision to stay with Hubert.

It was in 1957 that I met Hubert at the School of Arts and Crafts in Vevey in Switzerland in the photo section, Hubert is two years ahead of me, so he is in his final year but he is already a great organizer, he is in charge of the school magazine Prisme, and he is also the one who will organize the end of year ball. So I had known for a long time his honesty, his integrity and his sense of organization. And we did not hesitate to follow him in the Sygma adventure.

Our decision then was final and we have never regretted our choice. We have lived an extraordinary adventure together. Our professional life with Hubert has been doubled with a friendly life and today Monique and Micha are part of our family. I think of them both at this painful moment. But I think of Hubert thanks to whom my professional life has been an explosion of success and satisfaction,

Hubert: if I hadn’t met you, my life wouldn’t have been the same:

Thank you my friend!