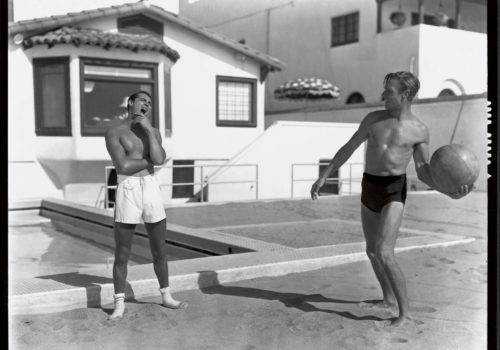 With a foreword by screen legend, Joan Collins, Hollywood Unseen: photographs from the John Kobal Foundation is published worldwide by ACC Editions.  An accompanying exhibition featuring images from the book was presented at the Getty Images Gallery, London from October 10th to November 2nd, 2012. The latest book to be drawn from the archive of the John Kobal Foundation, Hollywood Unseen is a showcase for, and tribute to, the incredible inventiveness and ingenuity of the marketing and publicity departments of the great Hollywood Film Studios – MGM, Paramount, 20th Century Fox, Columbia, Universal, Warner Brothers & RKO – from the late 1920s to the early 1950s.
The stunning and familiar portraits of Hollywood’s leading men and ladies and the scene stills from their classic movies are even today, all around us  – in books, documentaries, posters, postcards & modern brand advertising. The iconic images of Greta Garbo or Humphrey Bogart or Marilyn Monroe are still instantly recognisable today more than many of their actual movies. But these images were just one part of a continually ongoing stream of publicity materials being disseminated on a daily basis by the Hollywood Studios to publications worldwide.
The marketing departments used many other different photo-publicity angles to promote their stars and films. These photos – documenting the ordinary life of the Stars – were nothing less than a publicity department’s creation of how they wanted the public to perceive, behold and worship their talent roster. So the hobbies, husbands, wives, children, homes, pets, parties, premieres, etc of the Stars were paraded before fans who could never get enough of them. But, however they might appear, there was nothing instantaneous or casual about them. They were as prepared and as carefully constructed as any classic portrait or scene still even though most of those photos were used once or twice and then never seen again. This book is a display of those hidden unseen photographic gems.

This article is from the archives of Le Journal de la Photographie.