Charles Habib : A meeting with Gilles Caron fifty years ago 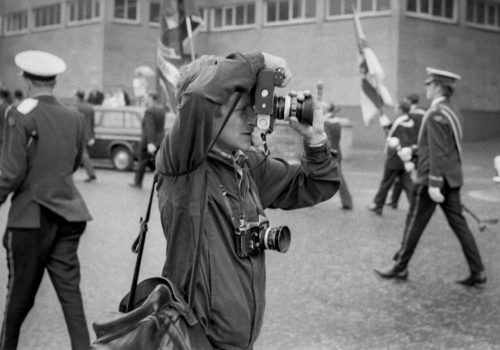 This was one of the most unexpected mails of the summer. He said: “Hello, I was with Gilles Caron in Ireland 50 years ago, I have pictures: are you interested in them?”

Of course ! Here they are as well as their story, by their author Charles Habib.

Two years before, I had started taking pictures and published, parallel to my studies, some reportages in a local magazine.

I offered the editor to go to Northern Ireland where riots between Catholics and Protestants were daily and increasingly violent. Arrived in Belfast early August, I left on the 12th for Londonderry for the “Apprentice Boys of Derry”, an annual Protestant parade considered by Catholics, the majority in this city, as a serious provocation.

At first, the parade went smoothly, but when it passed the Bogside Catholic district, stone throwing and Molotov cocktails began to rain. Clashes between Catholic protesters and Protestant police lasted three days and destroyed much of the neighborhood; On the afternoon of the 14th, an English army company reported to the local police putting an end to the violence.

At the beginning of the parade, I met Gilles Caron, who had just arrived to cover the event. I remember my surprise and joy when he showed up, because I followed and admired his work immensely. He probably had sympathy for the kid I was and accepted my presence.

I imagined that the author of all these extraordinary photos was a force of nature, but it was the opposite: Gilles Caron was small and very thin, almost fragile, he had a fine face with marked features and a soft voice. He looked more like a young student than a veteran fighter. With time I have forgotten, for example the color of his eyes or our rare discussions because we spoke little, ran a lot, photographed even more and during the rare moments of calm we rested in the car of a colleague. We had to spend one or two nights in a hotel but I have no recollection of it. On the other hand, I remember his kindness, his calmness in all circumstances and also … his impatience when nothing happened: do you have to stay longer? Is it over or will something happen again? Maybe I’m leaving to come back?

Finally, one or two days after the arrival of the British troops, he went to Prague to photograph the anniversary of the repression of the “Prague Spring”. His pictures of Ireland and Prague made a good part of the Paris Match issue that week.

To have been with Gilles for a few days in a foreign country where we did not know anyone was an extraordinary chance for the young photographer I was.

All I know about photojournalism, I learned from  following him during the fighting, observing when and how he photographed. For him, there were no images without immersing himself in the event, closer to the protagonists, because the pictures made safely behind a TV are without emotion. At that time only McCullin, Burrows and a few others shared this idea.

At the end of August I returned to Geneva.

In 1973, after a master’s degree in economics and reporting for Swiss magazines, I started working for Gamma.

The writer Céline said in speaking of the job of chronicler: “If you do not put your skin on the table, you have nothing”