History according to Maurizio Galimberti 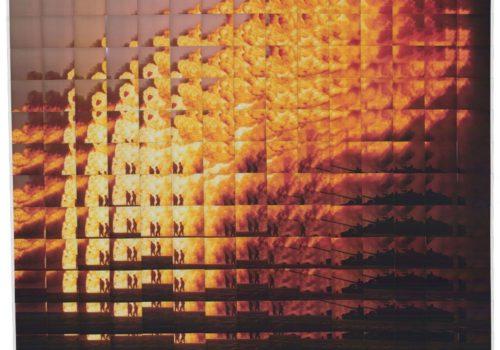 When we read the captions and look at the images in the book “L’illusione di una storia senza futuro. Maurizio Galimberti” (and those in his recent exhibition Maurizio Galimberti. Uno sguardo sulla nostra storia at the Museo Diocesano in Milan), we feel like experiencing history unfolding right before our eyes.

They deal with the most recent history, a history too often made of wars and terrorist acts. A history that seems to be repeating itself, unaware of earlier events and mistakes, and that doesn’t learn from the ugliness of the past. Maurizio Galimberti somehow manages to freeze the salient point of the warm past – and of the present as well – of the world, immortalized by well-known photographers, decomposing the original images into fragments and exploding them, to the point of creating a strong visual everlasting echo of each event.

“Deploying a textbook readymade operation, Galimberti appropriates images created by others, rephotographing them and making them the matrix on which he then performs a cubist manoeuvre that breaks apart, alters, multiplies and/or otherwise modifies them”, Gianni Canova writes.

According to photoeditor Marisa Zanata, “this book, alongside the authorial work by Galimberti, shows the initial photo, the “matrix”, the iconic shot representing a fact of history while it happens. Indeed, these are dramatic moments and Maurizio, while paying a tribute to great authors, emphasizes the paralysis of suffering”.

In L’illusione di una storia senza futuro. Maurizio Galimberti (The Illusion of a History with No Future) Maurizio Galimberti and Paolo Ludovici press ahead with their reflection on the meaning of history and time, which began in 2020 with the book Uno sguardo nel labirinto della storia (A Glance into the Labyrinth of History). “Indeed within this collaboration, Ludovici invited him to recount History. And he does it by underlining gestures, and reinterpreting the images: it’s a grief that’s crystallized within graphic cages” Roberto Mutti, historian and critic of photography, says.

Maurizio Galimberti’s artworks have been defined as “mosaic-images”, he decomposes the whole, into fragments to generate a new picture, a “new whole”. This is how he creates his portraits of most iconic celebrities and with this same approach, he is facing 20th-century history. While covering it, alongside tragedies from the Vietnam war or the Covid-19 pandemic, “the Instant Artist Galimberti also deals with some main characters, capable of giving a sign of hope, like Mother Teresa of Calcutta or Nelson Mandela”, Denis Curti, who curated the exhibition in Milan says.

L’illusione di una storia senza futuro, features texts by Gianni Canova and Maurizio Rebuzzini, who writes: “Galimberti marks the exact times of the story (…) His storytelling does not include anything superfluous; instead, he gives voice to what is effectively necessary: visions, decompositions and recompositions that impose reflection, that lead us into the temptation of thinking”.