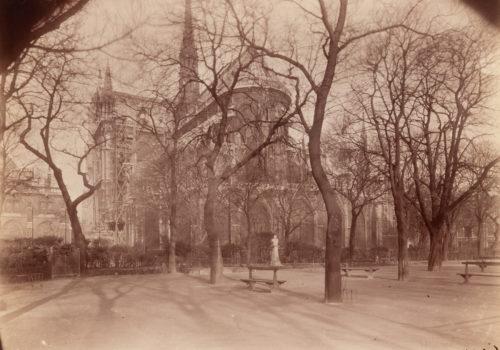 Eugène Atget photographs sold by The Museum of Fine Arts, Houston are presented at the auction house Hindman in Chicago on December 6, 2022.

Hindman presents a rare collection of photographs by Eugène Atget, a pioneer of photography, whose documentary vision of Paris was highly influential to artists across the globe, inspiring everyone from Man Ray to Ansel Adams. Originally owned by American photographer Berenice Abbott, an early champion of Atget, these photographs were then in the collection of the Museum of Modern Art, New York before finding their way to the Museum of Fine Arts, Houston. This 42-lot auction on December 6 is a stunning display of Atget’s ability to capture Paris’s rapidly changing architecture and culture in the early 20th century.

“The Museum is pleased to partner with Hindman on this distinguished sale of photographs by Atget, the proceeds of which will support our future photography acquisitions,” commented Malcolm Daniel, the Gus and Lyndall Wortham Curator of Photography at the Museum of Fine Arts, Houston. “With a rich collection of more than 150 other works by Atget at the MFAH, we believe the photographs offered here will be more widely seen and appreciated elsewhere, becoming beloved highlights of other personal or public collections.”

Atget was born in Libourne, near Bordeaux in 1857 and orphaned as a child. When he discovered photography in the late 1880s, he was drawn to the street life and architecture of the capital. The documentary aspects of his photography came to be embraced by renowned photographers and by the mid-1920s, Atget had become a favorite of the Surrealists, particularly Man Ray, but also by American photographers such as Abbott. Without Abbott’s work in preserving Atget’s archive, it is unlikely that successive generations of American photographers, from Walker Evans to Lee Friedlander would have been influenced by his work.

The collection offered in this auction features significant highlights from Atget’s career of iconic Paris landmarks including Notre-Dame, Fête de la Villette, Moulin Rouge and Versailles. Alongside these celebrated locations, bidders will also have the chance to bid on works that depict places and preoccupations such as a shadowy stairwell on the rue des Archives, a stark alleyway near rue des Gobelins, primroses in full bloom and a wintry tree at St. Cloud.

Bidding for the December 6th auction will begin at 10am CT and will be available in-person at Hindman’s Chicago saleroom, via telephone, absentee bid and online via Hindman’s Digital Bid Room.

Additional information is available at www.HindmanAuctions.com.