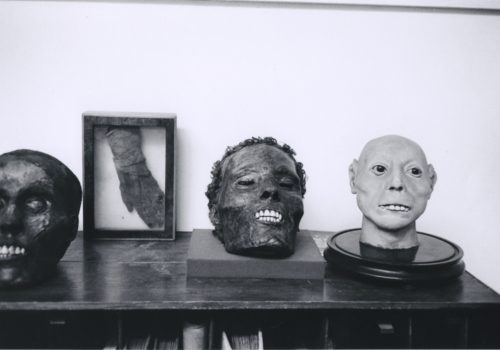 The Galerie Les Douches in Paris presents exceptional images of the photographer who died at the age of thirty-six. An ode to the weirdness and anatomy of the body.

As in an attic where sordid and disturbing objects, funny or surprising, would be strewn, the world offered by Hervé Guibert through this series of photographs is an encounter with strangeness. Head of wax dolls, cut hands, skeletons of animals … The photographer was able to penetrate behind the scenes of institutions such as the Musée Grévin, the Musée de l’Homme in Paris or the Specola in Florence and drew these portraits of the bizarre where the human is mingled with the inanimate, where death lurks in a company that aims to counter it.

Take the Grévin museum for example. Guibert manages to enter the doll making workshops which will then be staged in the museum. He photographs heads under plastic bags, hands lying on the edge of a table, busts waiting to be given limbs … The whole forms a whole which questions the notion of fragments, wastes, drawing of body and gives a macabre and carnal atmosphere, like an antechamber of death where a child’s smile would be hovering.

When Hervé Guibert made these images, in 1978 and 1979. He was then a good friend of the photographer Bernard Faucon who has made a specialty of taking pictures of children mixed with models. Hence perhaps also the idea for​ Hervé Guibert to capture portraits of dolls and puppets, skeletons ,masks and skulls. The inanimate which takes shape in the envelope of animated beings and which, at the same time, delivers the feeling described by Freud of the disturbing strangeness. To be both at home and outside, human and non-human … In a photograph, a wax doll’s head is placed next to a cabinet where dozens of fake eyes are placed. The visual metaphor is beautiful: the photographer who confesses the multiplicity of his gaze.