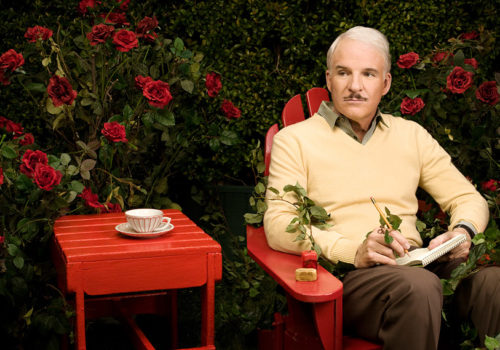 “I had Carmen Electra actually wanting to take off her clothes for a shoot for Entertainment Weekly and her publicist came in yelling no, no, no, no, no,” laughs Michael Grecco, one of the world’s leading celebrity portrait photographers. “When you’re working with talent there are certain rules and one is that the talent gets the final say of what you can and can’t do. Or in this case, the publicist!”

Michael Grecco began his career in Boston where he spent 13 years working as a photojournalist. But after getting too close to the action one time and finding himself face down while a haze of bullets screamed above, he decided to change direction. An offer from People magazine to move to Los Angeles was his ticket out.

Two decades on and Grecco has carved an enviable reputation shooting portraits of some of Hollywood’s heavy hitters, Steven Spielberg and Martin Scorsese to name two. His stable of clients includes HBO, NBC/Universal, leading magazines such as TIME and Wired as well as global advertising agencies.

“I go out every day with the intention of breaking visual rules to create an evocative, cinematic image that inspires,” says Grecco. He is also a meticulous planner. “When you’re shooting a celebrity who is so heavily scheduled you have to nail down everything and test it before they arrive…Hollywood talent want to feel like they are not wasting their time.”

Influenced by the masters of portraiture, in particular Richard Avedon and Annie Liebovitz, Grecco says he looks for “that moment between moments, for the moment that is not obvious,” what he says Avedon was renowned for. “I love the way Annie tells a story too…I always look for the story”.

In creating his vision he also draws on the history of photography. His portrait of Will Ferrell, which was shot while the actor was on a press junket for the film Blades of Glory, channels Jean Harlow. “I’d seen the trailer for the movie and remembered the scene where one of the actors is lying on a polar bear rug. I see the polar bear and I’m thinking of George Hurrell’s portrait of Jean Harlow. A little seed of an idea grows; I’ll get Ferrell to pose on the rug, I’ll have him dressed in white, I’ll use a particular ring light…I arrive at his hotel with the whole kit and caboodle. Ferrell already has his hair and makeup done so I only need him for about an hour”.

Grecco is celebrated for his creative approach beyond Hollywood too. When the iconic camera company Hasselblad launched a new camera they gave Grecco free rein to create the campaign. “At the time I was working on this campaign, an exhibition of Richard Avedon’s Cape Canaveral portraits was showing. That got me thinking about Hasselblad being the first camera used in space. I had this vision of an otherworldly environment.  Originally we were going to shoot on the black lava of Hawaii but it didn’t work from a budget perspective, so we went out to Death Valley (California)”. He took his otherworldly concept and applied it to hair, make up and wardrobe as well as the location. “I was calling the stylist at the last minute and saying, hey bring a space helmet too!”

Grecco draws on a seemingly endless supply of creative ideas and is quick to come up with Plan B or even Plan C when needed, as was the case when he was commissioned by TIME to photograph comedian Steve Martin.

“He didn’t want us inside his home so we were told we could shoot in the garden.

Martin was writing his memoir and I saw the garden as a metaphor; he’s been there contemplating the perspective of his life and the garden has grown around him.” But when Martin learned Grecco was bringing a whole crew with him the actor vetoed the idea.

Undeterred Grecco built a garden set in the studio. TIME loved the idea and wanted to seat Martin in a child’s chair. The day before the shoot Martin called Grecco. “He says to me, I hate this idea of a kid’s chair…I don’t want it, it’s out!”  So the chair was replaced and Martin appeased.

“I’m used to accommodating all manner of requests like being told what side to shoot a celebrity from and having to place a mirror next to the camera so the celebrity can see themselves,” says Grecco. “It’s just part of working with talent. I’m part of the Hollywood image machine. I am an image creator.”