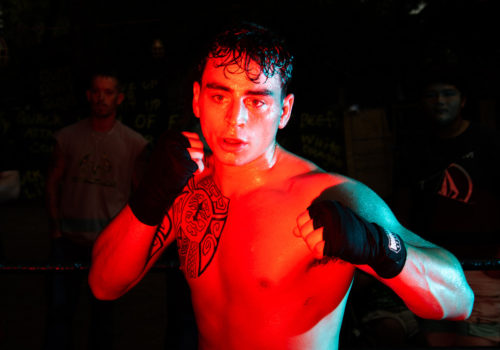 “You fight it out. And then, after that, you hug it out and you become friends. You know, you become closer, brothers, family. …”

For five years, photographer Brian Finke documented StreetBeefs, an underground fight club in rural Virginia founded by an ex-con named Scarface. Tired of seeing his community ravaged by preventable violence and drug-use and fueled by the distrust and failure of the prison system, Scarface began hosting fights, inviting anyone anywhere to come resolve disputes with their fists, not guns. Thousands of fights later, The Yard has grown into a cult destination and supportive community. It’s a positive space not only for conflict-resolution but also an outlet for recovering addicts and ex-convicts, ameture fighters, the young and bored, or anyone needing to relieve stress by punching someone in the face.

In Backyard Fights, Finke captures the personalities, drama, and grit, dancing between the use of his signature hyper-realistic style and a softness that captures the unsuspected grace of each moment.

Excerpt from the book introduction by Scarface

When I started Street Beefs, there was just an idea–just let’s give these guys who have a dispute someplace to solve it where it’s regulated or they won’t severely hurt each other or go to jail. And it just has evolved, and it’s grown. It graduated to people just liking to be around because we train all the time, we hang out and people wanted to be a part of the family—club atmosphere. So, people just wanted to fight for sport. Street Beefs now is like a club. And it’s a club where we let anybody join. The motto is “Guns Down, Gloves Up.” You don’t go outta here pulling weapons on people. You don’t go out jumping people, pulling knives, any of that–you fight with honor. You don’t street fight. If there’s any way you could avoid it, you do not street fight, you bring it here. You exercise regularly. You have a good treatment of your friends and a good personality in the group.
Scarface, Harrisonburg, Virginia

Brian Finke’s visual cultural commentary focuses on authenticity and the absurdity of everyday life and the range of human behavior. A stylized documentarian and trained photojournalist, Finke’s honesty and intimacy when capturing subjects strikes at the core of contemporary life, with a uniquely American point of context and graphic sensibility.

Often with boundary pushing subject matter, Finke challenges the viewer to confront what is often right in front of them, with an almost surreal understanding of immediacy, time, and place. From street photography to commercial portraiture to fashion editorials, his immersion in culture-at-large creates imagery that is deeply tied to the political and emotional undertones of the modern world.

A graduate of the School of Visual Arts in New York City, Finke received a BFA in photography in 1998. He is the author of several books, and his first monograph, 2, 4, 6, 8 (2003), was named one of the best photography books by American Photo magazine. Earlier in his career, Finke was one of twelve artists nominated for the International Center for Photography’s annual Infinity Award, and he won a prestigious New York Foundation for the Arts Fellowship. Finke’s work is in nine museum collections in the U.S. and abroad, and he regularly shoots for editorial clients like National Geographic, M magazine, and The New York Times as well as commercial clients, including Delta Airlines, Uber Eats, and eBay. In addition to photographing his longterm personal projects, Brian is a guest teacher at the International Center of Photography in Manhattan and FotoFilmic in Vancouver