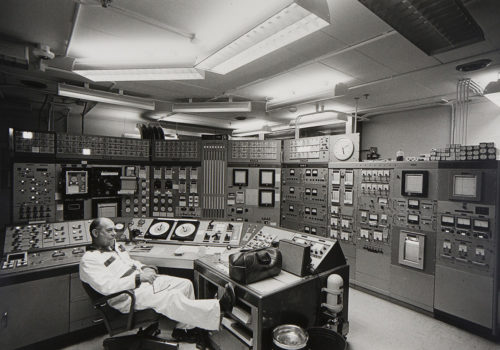 This fall, the Harvard Art Museums present the special exhibition Devour the Land: War and American Landscape Photography since 1970, a groundbreaking photographic exploration of the impacts of militarism on the American landscape. Featuring approximately 160 photographs by 60 artists, the exhibition reveals the nationwide footprint of the U.S. military, the wide network of industries that support and supply its work, and the consequences of—and responses to—this activity.

The photographs on display bear witness to a vast geography of environmental damage: millions of acres of land contaminated by nuclear power plants and weapons manufacturing and testing facilities, locations where military waste is actively detonated and burned, decommissioned bases that have been abandoned, and a staggering number of sites across the country that the EPA has declared in urgent need of cleanup (known as Superfund sites). Some of these places have become infamous for health and human welfare issues, such as Cancer Alley, a 150-mile pollution-ridden industrial corridor along the Mississippi River between Baton Rouge and New Orleans. Others are intentionally hidden from view, like the hundreds of prisons that sit within three miles of Superfund sites. Contaminated water and raw sewage from these prisons endanger local communities, which are often rural and poor. In addition, the photographs document the militarization and devastation of Native homelands and the subsequent displacement of Indigenous peoples.

“We have devoured the land,” declared Union Army General William Tecumseh Sherman. He was referring to his infamous March to the Sea during the American Civil War (1861–65), for which he instructed troops to “enforce a devastation more or less relentless”—to eliminate the land-based resources and infrastructure that supported the Confederate Army. Sherman was also describing the weaponization of the environment as a means to wage war.

Following a trajectory that originates in the Civil War era, Devour the Land begins with the 1970s and early 1980s, a dynamic period for both environmental activism and landscape photography. American photographers began to rethink the dominant vision of U.S. lands that Ansel Adams had promoted through his collaborations with the Sierra Club, which presented nature as remote, pristine, grandiose, and without inhabitants. For some—including photographers involved in the documentary initiative the Long Island Project, or those featured in the 1975 watershed exhibition New Topographics: Photographs of a Man-Altered Landscape—this meant being attentive to the everyday, including the ways people were connected to (or disconnected from) the land and the environment. For others, it involved taking up a model based in environmental activism and committing to the act of bearing witness.

While continuing to portray the destructive consequences of military activity on American soil, photographers working today also explore how preparations for war and the aftermath can sometimes lead to surprising instances of ecological regeneration and change. Depicting affected regions across the country, their work prompts questions about public oversight, land use and management, human rights, the rights of government, the ethics of technology, and the function of photography as art and as document. Across six thematic sections—Silent Spring, Arming America, Slow Violence, Regeneration, Other Battlefields, and Resistance—the images gathered in the exhibition present a collective portrait of the emergence and expression of these concerns in American photography.

“The military plays a very complicated role in our society, and I want to remind people of what is happening within the land in which we as Americans live and that what we do has consequences,” said curator Makeda Best. “And part of the story is questioning whose land, and whose jobs, and whose lives are expendable, and whose are not. I ask visitors to question how they can put their creative energies toward solving these environmental issues.”

The 60 artists showcased in the exhibition bring a variety of practices and approaches to their work. They range from professional photographic artists and photojournalists to lesser-known and emerging photographers:

Several of the artists featured in the exhibition share their activism and viewpoints in interviews published in the accompanying catalogue. Others will take part in programming and/or a series of video interviews to be released on the museums’ YouTube channel over the course of the exhibition.

The majority of works on display are drawn from the Harvard Art Museums collections, including many recent acquisitions. Additional works are on loan from other Harvard repositories, North American public institutions, and private collections.

“Together, these images speak to the unexpected and often unknown ways that warfare has transformed the environment over the last half century,” said Martha Tedeschi, the Elizabeth and John Moors Cabot Director of the Harvard Art Museums. “Despite the increasingly urgent threat to the natural world and the fact that our own military holds the unenviable position of being a top polluter,

Devour the Land is the first photography exhibition to center this issue. We are grateful to the lenders and artists who have helped us tell this critical story.”

An accompanying installation is also on display in the Lightbox Gallery, an experimental space for digital research and development located on Level 5 of the museums. Using the Lightbox’s large, interactive monitors, visitors can explore in closer detail select portfolios represented in the exhibition: Nina Berman’s Acknowledgment of Danger, Peter Goin’s Nuclear Landscapes Portfolio, David T. Hanson’s Waste Land, and Barbara Norfleet’s The Landscape of the Cold War. A free poster is available in this space for visitors to take home; it overlays a map of the United States with key developments in environmental policy and activism over the last 50 years.

A Spotify playlist spanning nearly nine decades of environmentalism in music extends the experience of the exhibition. The playlist, available through the Harvard Art Museums profile on Spotify (hvrd.art/spotify), features songs by Johnny Cash, Mos Def, Sharon Jones & The Dap-Kings, Xiuhtezcatl, Midnight Oil, and others.

On view through January 16, 2022, exclusively at the Harvard Art Museums.