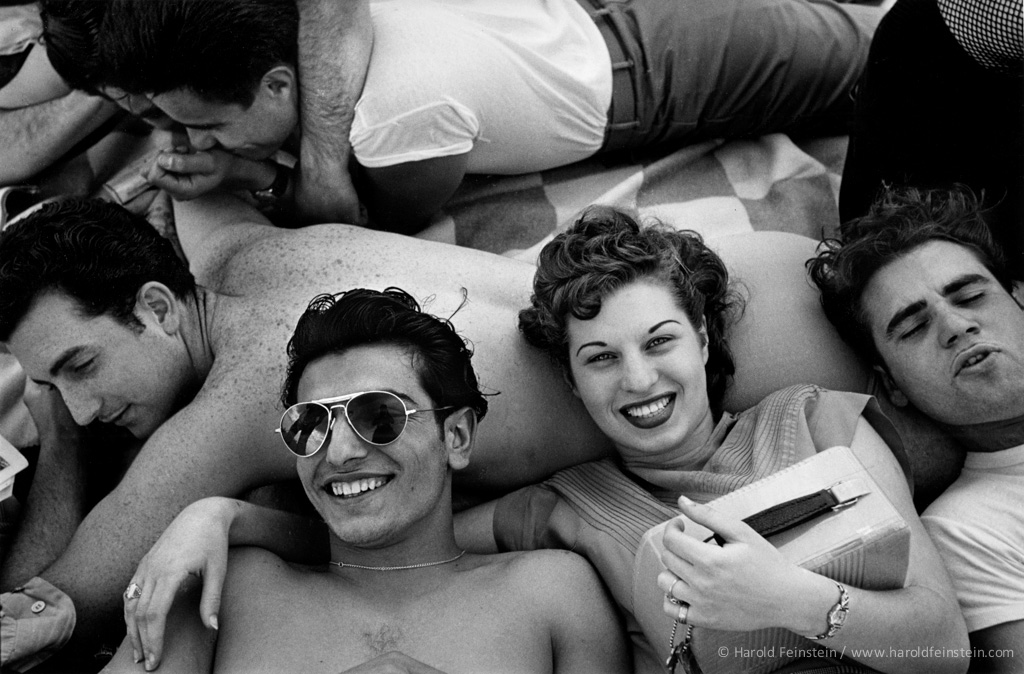 Harold Feinstein was born in Coney Island in 1931. He began his career in photography in 1946 at the age of 15 and within four short years, Edward Steichen, an early supporter, had purchased his work for the permanent collection of the Museum of Modern Art (MoMA). He joined the Photo League at 17 and became a prominent figure in the vanguard of the early New York City street photography scene where he exhibited at Helen Gee’s Limelight Gallery and was a designer for historic Blue Note Records. He was one of the original inhabitants of the legendary “Jazz Loft,” which he later turned over to his long-time collaborator and colleague W. Eugene Smith for whom he designed the original lay-out of the famous Pittsburgh Project.
Their association prompted this statement from Smith: “He is one of the very few photographers I have known, or have been influenced by, with the ability to reveal the familiar to me in a beautifully new, in a strong and honest way.”

At the age of 26, Harold Feinstein has reached the point in his photographic career when the word ‘master’ is being applied to his prints by some ordinarily cautious critics.

He is also renowned as a teacher. In his early 20′s he began teaching in New York City. Former New York Times photocritic A.D. Coleman calls him “one of a small handful of master teachers whose legendary private workshops proved instrumental in shaping the vision of hundreds of aspiring photographers.”

In addition to his private workshops held in his studio, he has taught at the University of Pennsylvania’s Annenberg School of Communications, Philadelphia Museum School, School of Visual Arts, the University of Massachusetts, Maryland Institute of Art, Windham College, and College of the Holy Cross.

Feinstein is best known for his six-decade engagement with Coney Island. His 1990 show at the International Center for Photography (ICP) entitled A Coney Island of the Heart: Five Decades of Photographs elicited this review from A.D. Coleman:

While his Coney Island work has been much celebrated, Feinstein’s breadth and exposure are far greater. His photographs from the Korean War, taken from the perspective of a draftee, offer an intimate look at the daily life of young conscripts from induction, to basic training, to the front lines. In addition, he has a large collection of classic street photography, nudes, portraits and still life. His first black and white monograph, Harold Feinstein: A Retrospective, was published in 2012 by Nazraeli Press and won a Photo District News 2013 award in the Best Photo Books category.

Feinstein first began exploring color in the mid 80′s, shooting 35mm photographs of flowers and seashell against the sky. This resulted in a large archive of imagery produced as both cibachrome and dye transfer prints. Images from this collection were published in LIFE magazine and numerous other publications. In addition, he pioneered the use of a kaleidoscopic lens, producing a portfolio of abstract renderings of New York City architecture, published by LIFE magazine and exhibited at the Municipal Art Society of New York. He drew inspiration for this series from Louis Kahn and Frank Lloyd Wright who asked Feinstein to photograph their work. Also in color, he produced an extensive photo essay of Rodin’s small-scale sculpture in tribute to his lifelong affinity to the master.