Hannah Darabi: The spring of words and photographs in Iran 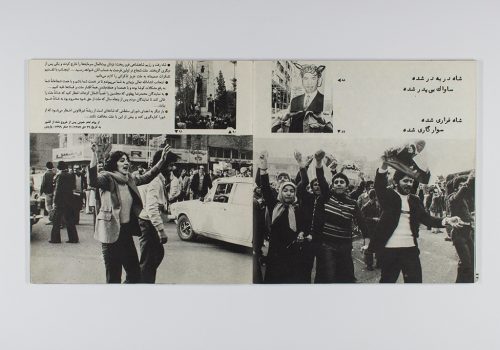 On the occasion of the 40th anniversary of the Iranian revolution (1979), the BAL celebrates the freedom of writing and photography that took place at this time in the country. A moving kaleidoscope led by the magic wand of Iranian artist Hannah Darabi and her accomplice, researcher Chowra Makaremi.

Under quaint covers, in strange and colorful formats, are hidden free words against authoritarianism and dictatorship. This frieze of books displayed in the first space dedicated to this exhibition offers a panorama of the literary profusion that took place in Iran in the aftermath of the 1979 Revolution. Until the mid-1980s, the country experienced a form of spring where it was allowed to make books with ardor, sensitivity and humor and that soon, was banned. The artist Hannah Darabi had the genius to collect these works, part of which are banned by the current Iranian regime. They are various texts, ranging from the confession of a prisoner to the open criticism against the importance of the Moslem religion or the reflections which preach Marxism … But books that are free, fond of the independent spirit that has since fallen prey to a closed regime that practices censorship.

“Days of blood, days of fire”

Words, but also images. In a second part, the exhibition presents the incredible collection of photography books orchestrated by Hannah Darabi. There is, for example, a then cult work about the days of the Revolution: “Days of Blood, Days of Fire” by Bahman Jalali and his wife Rana Javadi. Published in June 1979,  reissued in September of the same year, in total thirty-five thousand copies. The third reissue was rejected by the Ministry of Culture. A regime that also publishes books sometimes taking over photographs to turn them into propaganda. In this mishmash of images and words, one must read carefully the captions designed by the artist. They tell the incredible effervescence  the country experienced at that time and how freedom gradually became more and more fragile.

“I was born at the time of the Iran-Iraq war in 1981”, explains the artist who adds: “I gradually realized that I did not know anything about those years, that had historical events that were not taught to us. In fact, the artist has rediscovered a whole section of the history of the country by buying books here and there. “This is an open breach in Iran’s past,” says Diane Dufour, the director of the BAL, who salutes the courage of the Iranian artist who exposes herself to the regime’s potential anger. But this act is salutary: it gives color to the history, exposes nuances, participates in the transformation of the collective thought and sketches the constitution of a free and assumed identity.

At the four corners of the exhibition space the artist has made walls of images and words to deliver her vision of being Iranian today. These walls bear the gaze of a woman who seeks to revive the collective memory that is intimately linked to her personal history. Her installations, which are called “reconstructions”, form a kind of traumatic matter where photographs and texts are obvious while the mind tries to get an overview. This matter is traumatic because it breaks out in fragments, but it is all the more honest, authentic. Hannah Darabi even goes so far as to write a piece of her own school memoir in Iran during the war: “Our primary school was equipped with underground shelter. When the loudspeaker  “red siren” sounded, we were taken to these shelters. I tried to delay the moment to enter as long as possible, and I kept looking up at the sky before I went down, hoping to see military planes. (…) I was not going to cry, I was no longer a baby “. On the anniversary of the revolution, on February 11th, the BAL organizes a special day of debates, conferences and screenings around Iran today and yesterday. A great way to extend the fascinating memory of this exhibition.

Enghelab Street, the Revolution by the books

6 Impasse of the Defense