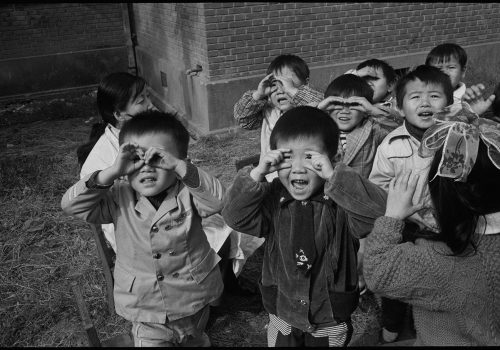 A Breton born in Paris in 1941, a Magnum veteran for the past 42 years, Guy Le Querrec has three loves. Photography is his greatest passion, but he also has an innate talent as a teacher, which was detected by Marc Riboud. It was Riboud who asked him to create a workshop at the Arles Photo Festival in 1976. His subsequent master classes have trained many amateur and professional photographers alike including Patrick Zachmann (another Magnum member). This exhibition for Arles + Jimei arrives at the 30th anniversary of his Arles workshop in China, which he conducted in Fujian in Xiamen and Quanzhou, along with eight trainees from the Arles Festival in 1988. His second love is his “country” of origin,  Brittany, where he has photographed relentlessly over the years. And third, as a music lover, he is passionate (and knowledgeable) about jazz.

His musical awakening came from listening to his parents’ 78 rpm vinyl records, especially from the Swing of Belgian accordionist Gus Joseph Viseur. The name Viseur (viewfinder in French) would attach Le Querrec’s eye to his Leica’s viewfinder for life, and set him on the road to photographing the world’s greatest jazz musicians. It is therefore not surprising to find great musicality in all of his photographs; his sense of rhythm especially, which made him known as “the photographer who makes the hands dance”. In fact, Le Querrec’s picture that Cartier-Bresson has chosen for his book, “The choices of Henri Cartier-Bresson”, published in 2003, is precisely the image of Four Tuareg women singing in Timbuktu, Mali (1998). The photo captures the moment of the clapping of hands by these women, totally covered under their black burqas, but we can clearly see two hands clapping on-beat and two hands clapping off-beat, a break illustrated by the crack of light between the women in black.

Africa is Le Querrec’s favorite continent, since his first job was that of photojournalist for the weekly Jeune Afrique. Among the books he has published on Africa, the one released in 2015 focuses on the Lobi, an ancient tribe of Ghana and from Burkina Faso. Another tribe that has captured the attention of Le Querrec are the Lacota Sioux of North America, who would every year embark on a memorial ride to honor their ancestor, Chief Big Foot, a hundred years after the Wounded Knee Massacre. Le Querrec went to ride with them in 1990, across three hundred kilometers in two weeks. Guy remembered only two words: “Cold. Courage”. But this trip brought him a beautiful photo book, especially with this striking instant geometry when his frame is filled with the head of a black mustang, and in the foreground, the inquiring eye of the horse; and in the background: the eye of the Indian rider perceived through his black balaclava.

But Guy Le Querrec’s most unexpected journey was indeed China, a voyage to the East that he accomplished in four episodes. In 1984 at the invitation of the French-Chinese Friendship Association, Le Querrec discovered Beijing, Sichuan, Wuhan, Nanjing, Suzhou and Shanghai. Then he returned in 1986, thanks to Leica Camera, to photograph Beijing, Shanghai and Hong Kong. It was in 1988 that Guy Le Querrec discovered the Hui’an Maidens in Fujian Province, during his Arles master class in China. Then in 1989 he was part of the project “A Day in the Life of China”. Out of sixty foreign photographers he was the only one to select Fujian so that he could spend more time focusing on these extraordinary Hui’an Maidens. They are the key and the main thread of this exhibition, “The Chinese Gesture”, because in China today people have all but forgotten how these Hui’an Maidens did everything – while the fishermen sailed away. Guy Le Querrec followed the women everywhere, fascinated by their hardworking capacity. He shows us how they extracted granite stone in the quarry, how they transported slabs of stone with their bare hands and sometimes barefoot. How they took on the responsibility of building stone houses, but also mastering carpentry. At the same time, they would repair fishing nets, and raise children. They did all this with amazing grace. Their sense of elegance is reflected in their traditional costume, which they wear every day, rain or shine, even in the middle of important physical efforts–a short bodice that stops at the navel, tightly tailored pants, a handkerchief worn over the hair but under a big bamboo hat as a shield from the sun. Their extraordinary sense of solidarity displayed by working in teams, in groups of two or four or six…

Le Querrec’s “Chinese Gesture” is inspired by his rich harvest of images of the morning exercises of the Chinese, the taiji sessions, the morning stretching that he translated into choreography, a solo dance, a pas de deux or a collective ballet troupe performance. He confessed being drawn to movement, “When there is movement somewhere, that’s where I would go.” he said. If he was to visit a Traditional Chinese Medicine center, a Tuina massage session would be converted into a “visual dramaturgy”. He has accumulated hundreds of clichés (that’s also the word for snapshots) of Chinese photographers wiggling and writhing in every way to find the best angles through their viewfinders or to squinting through a barely developed negative roll to select their best images. His passion for jazz and his own practice of jazz photography led him to seek out the Old Men Jazz Band of the Shanghai Peace Hotel or Jimmy Jin, the guitarist leader of his jazz band at the Nanjing Jinjiang Hotel, and even the Quanzhou Folk Music Orchestra with their traditional Chinese instruments. In a nutshell Le Querrec would see and hear rhythm and swing everywhere. Consider the stunning brass band that he photographed at the burial in a rice field near a village in Chongwu, showing the musicians wearing white uniforms and hats—tradition of Southern China for funerals – still playing their saxophone, trumpet and drums but swaying with smiles as if they were intoxicated by their own music.

If there was only one picture to encapsulate Guy Le Querrec’s Chinese Gesture and the Master’s teaching talent, that would be the photograph taken in 1984 at Xindu’s Temple of Divine Light, which Le Querrec has called “The Flying Bag”. We can see on the left a big Chinese character FU (which means happiness, also luck and fortune) in a square frame engraved on the wall, and a man touching it with his hand. In those days visitors of the temple were told to approach the character FU with their eyes closed and then to touch it with their hands, so they could be blessed for happiness and fortune. But in the foreground another man in a cap had lifted his right arm as if he were saluting his comrade. And above his cap, there was this flying bag! Le Querrec as of today remains unable to explain where this bag came flying from. It is the mystique of film photography that makes you discover your “happiness” only well after the negative is developed. This bag is what Roland Barthes called “Punctum” in his book, Camera Lucida. And what Le Querrec calls “the decisive instinct”. A photograph becomes an icon only when, as in jazz music, everything sounds right, even in improvisation, the form and the subject are in tune, the composition and the signifier of the image. This flying bag is the perfect Chinese gesture that crowns his China Journey (“gesture” from the ancient Latin also means journey, accomplishment and exploits).