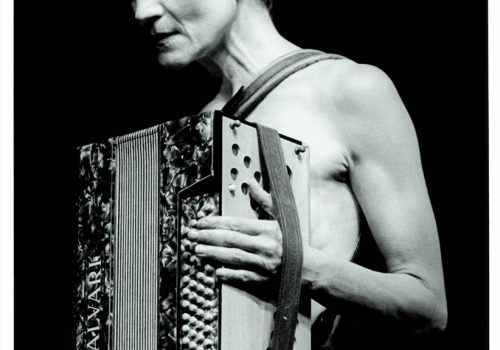 Editions Actes Sud is republishing the photo book of Guy Delahaye’s Pina Bausch shows. For more than thirty years, the photographer has immortalized theater and dance on all European stages and beyond, and has photographed all the shows of Pina Bausch. This book contains no less than two hundred and ten black-and-white and color photographs that cover the entire artistic career of the German dancer and choreographer. Guy Delahaye has also illustrated thirty books and published several books of photography, published by Actes Sud, Sankai Juku (1994), Angelin Preljocaj (2003), Jean-Claude Gallotta (2005). He dedicated a first book to Pina Bausch in 1986 by Solin / Actes Sud.

It’s been a long time since I wanted to reissue this book because since its last publication in 2007, Pina Bausch has died. Her death was a big blow for me, who had followed her for so many years. So I wanted to add two shows that were missing in the previous edition, to put more recent photographs. And then I wanted to reissue it because the book sold like hotcakes.

What explains this success in your opinion?

I am not vain enough to think that this success is mine. Pina Bausch is a myth now. Everyone knows her. I think success comes from there. She is really the choreographer of the century.

How did you discover her work?

In 1979 I was working for a dance revue and so I knew many choreographers. Someone told me one day to go see the first show of Pina Bausch that came to France, at the theater of the city. I went there,with my camera, but without the intention of necessarily taking photographs and I was so captivated that I immediately took tickets to go see the next show she was giving in France, at the Nancy festival, to photograph one of the most beautiful shows, Café Müller.

And since you did not miss any show?

Yes, I photographed all of Pina’s shows. Thirty nine of them. I went to Wuppertall many times. I went there about every month. Pina Bausch trusted me and gave me free access to photograph as I wanted. She never asked me anything, she let me do it. But I have never been able to see a rehearsal. We did not have the right. I only photographed her shows. In all, I made no less than 30,000 photographs. For the book, I selected 210.

The selection work had to be difficult …

It was complicated, but I did it by letting myself be guided by my emotions. I followed my mood and some themes.

And difficult to photograph dancers while they are in full swing …

This is the question we routinely ask people who photograph dancers. I don’t know how I do it. I think it’s instinct. When we take pictures it’s immediate. You really have to have that instinct. I’m not obsessed with capturing the movement. What interests me  above all is to share my emotions with the help of the performance.

Café Müller and The Rite of Spring. Both have a magic, something exceptional …

What has marked you in your meeting with Pina Bausch?

Pina was a very strange character. Sometimes I spent three or four hours without her saying a word. I remember that I was with her the night we learned in 1986 about the explosion at the Chernobyl nuclear power plant. Pina started crying and she cried all night long. She really carried all the misery of the world on her shoulders. In the street, sometimes, people stopped to give her money  she seemed so miserable. She was somebody very fragile.\

I was a little afraid of her. She was so strange. She had unpredictable reactions. Pina was someone who was in her own world and who was an incredible worker. I think she was on deck 24 hours a day, and she hated Christmas and New Year’s Day because she could not work. She was doing a job on the obsession. I was inspired by that, I work with obsession. Great creators, like her, are hard workers.

Workers that you have immortalized …

Yes, whether it’s Pina Bausch or others, I’m really passionate about this work. I was lucky because I always photographed people I loved. I fell in love with so many shows … This job – taking pictures of shows – is unfortunately disappearing. Today, theater companies are content with simple visuals. With the advent of digital technology, it signals the disappearance of this profession and it’s sad.