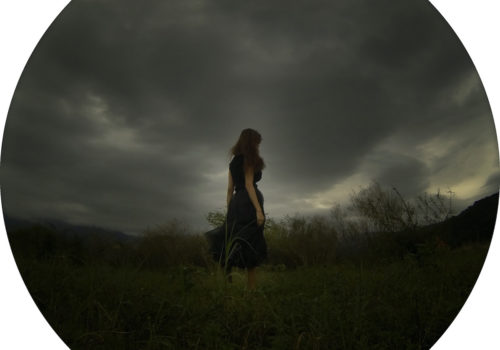 “Return to Paradise” series, making a little reference to this time of the Anthropocene.

This series works as a meeting point, to rethink and overcome this separation of humanity with the environment, to make us reflect on the climatic urgency, generate environmental awareness and responsibility with the planet that contains us and we inhabit.

And the question: where do we stand in this symbiotic world, close to this common future?

I like to work first based on a concept or idea. In the process of interaction between my epicenter and the peripheral it is vital for the creation of my art and for its renewal.

Reflecting on the connection between certain milestones such as adulthood, life, death and the way to order them, scrutinize them, to generate a change, mutation, regeneration, sometimes it comes out unintentionally.

In The daily exercise that artists do, of recognizing ourselves in images that arise many times, we do not really know where from, there is always the option of jumping. To give in to the void. To give everything for something that we don’t even know if it exists.

I wanted to experience the fact of ceasing to be the center as in my other series, to get out of focus, to focus, on something other than myself, and it was a challenge, working with the landscape without falling into the commonplace , get out of myself, just be behind the camera and shoot without getting involved as part of the work.

Recreate the settings, the environments, the virginity of the landscape, the destruction of nature, the threatening demographics, merge between the fantastic or the almost unreal.

I think it has more to do with exploration, and also with self-knowledge, running away from the place of comfort, to create from a certain abyss and emptiness.

It is a personal exploration with a certain fragility and intentional ambiguity, which speaks of the feeling of helplessness, separation, limits, edges, time and how the state of things is on the verge of bursting.

What is it not? What is it?. Classical science insisted on equilibrium, order, and stability. Today we see fluctuations and instability everywhere. We have become aware of the inherent complexity of the universe.

The more we explore the universe, the more dismayed we are by the narrative element that we find in all its levels.

Nature also presents us narratives embedded one within another; cosmological history, histories on a molecular scale, history of life and of man until we reach our individual history.

Without stopping to ask ourselves almost like a mantra What is it, what is on the other side? loss, pain, chaos and the need to escape, as human beings spectators with an imaginary, reviewing our lives and our states, and trying to connect in parallel with this real world that sustains, that invites, enchants, that demands, that the time is so uncertain, insecure and abstract. Life as a whole as a single cosmic entity.

And it is in that path and in that background or limit where my images aspire and where the forms begin to dissolve.