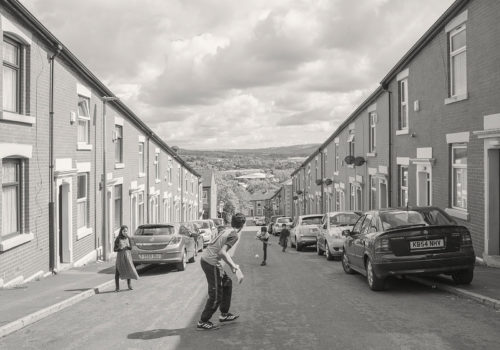 Bank Top by photographer Craig Easton examines the representation and misrepresentation of northern communities. The work focuses on a small, tight-knit community in Blackburn, England, which has become synonymous with the use of words like segregation and integration – BBC’s Panorama describing it as ‘the most segregated town in Britain’. Easton’s photographs, alongside texts by writer, poet and social researcher Abdul Aziz Hafiz, aim to confront stereotypes and question the dangerous over-simplification of the challenges facing such communities. They do so by presenting the contemporary experience of residents as an ‘alternative history telling’.

The black and white photographs in the book were all made in an area less than half a mile square in Blackburn during 2019 and 2020. Working with a large-format wooden field camera, Easton spent long days and weeks in the neighbourhood making pictures and talking to residents—some of their testimonies are incorporated into the book. This long-form collaboration, which melds images and text, acknowledges the issues and impacts of social deprivation, housing, unemployment, immigration and representation, as well as past and present foreign policy. The result is a collective and nuanced portrait of the town — a sensitive response to the distorted representation of such communities in both the media and by government, which deny the right of Bank Top to tell its own story.

‘The way that northern towns, neighbourhoods and people are presented in the media and absorbed by the popular imagination is full of homogenising signifiers of red brick terraces, women wearing headscarves and tough ‘blokes’. These mythologies are toxic fairy-tales ignoring the true stories of the complex social and ethnic textures of places like Bank Top, of lifelong friendships, marriages and bonds between people of contrasting backgrounds and multiple ethnicities and identities. Who does this oversimplification by the media serve? Why is the diversity brought about by complicated journeys taken to arrive here ignored? Is this a story about the observer rather than those being observed?’.
Abdul Aziz Hafiz

‘Walking around the neighbourhood now, one might imagine the rapid change imposed by industrialisation and the homeless farm labourers forced away from subsistence and the land, or the migrant workers from Scotland and Ireland awaiting their fate during the Lancashire cotton famine huddled together in the sculleries of terraced houses. These early outsiders would have experienced the same ‘otherness’ and ‘otheringness’ felt by later immigrants, whether they were the Polish after WWII, the South Asians in the 1960s and 1970s, or the more recent arrivals from Eastern Europe after successive expansions of the EU. Bank Top now is as diverse and as complex as any cosmopolitan neighbourhood and one can hear history speak through its urban core and through the neighbourliness of its multicultural community.’
Abdul Aziz Hafiz

Craig Easton was named ‘Photographer of the Year 2021’ at the World Photography Organisation Awards in 2021. Work from BANK TOP will be exhibited at Somerset House, London from 15 April – 2 May 2022 before touring (dates and venues TBC).

Craig Easton’s work is deeply rooted in the documentary tradition. He shoots long- term documentary projects exploring issues around social policy, identity and a sense of place. He often working collaboratively with others to incorporate words, pictures and audio in a research-based practice that weaves a narrative between contemporary experience and history. Easton conceived and led the SIXTEEN project with sixteen leading photographers exploring the hopes, ambitions and fears of sixteen-year-olds all around the UK. This Arts Council funded project was exhibited in over 20 exhibitions in 2019 / 2020. His work is held in private and public collections including the FC Barcelona collection, St. Andrews University Special Collections, Hull Maritime Museum and Salford University Art Collection.

Abdul Aziz Hafiz is a social researcher and writer whose research interests emerged from 20 years work in local government with communities in disadvantaged neighbourhoods in inner city London and Pennine Lancashire. He is closely affiliated with the Recording Leisure Lives conferences organised by the Centre for Worktown Studies, Bolton University. His research interest and work has produced outputs in the leisure studies of 20th century working class communities, specifically South Asian families in the north.