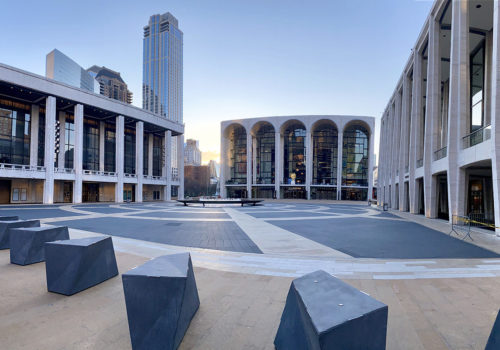 Mid-March 2020: Native New Yorker Gregory J. Peterson is on an early evening walk in his neighborhood on the Upper West Side of Manhattan when the unthinkable happens. The 24-hour city shuts down to protect its citizens from an invisible, lethal novel coronavirus raging through it. Manhattan’s iconic public spaces are now devoid of people. The monumental Lincoln Center Plaza is emptied of opera and ballet fans. Sounds of skaters on ice and the bustle of tourists at Rockefeller Center’s world-famous skating rink are absent. Not a single soul can be seen going to mass on Easter Sunday as churches, including the Cathedral of Saint John the Divine, are closed. Starkly silent, the city is stilled, as no one had ever seen it before. xx

Traveling by foot and bike to avoid contagion, Peterson embarked on a personal journey to document a momentous point in time in the city where he was born and raised. He took more than 400 photographs of over 200 locations in the city through the spring and summer of 2020 to capture its beauty when no one was there. Using his iPhone 11, he photographed landmarks that now looked almost surreal without people―the United Nations Secretariat with no traffic, visitors, or flags, 42nd Street in front of Grand Central Terminal without a person or even a car in sight, and storied neighborhoods famous for their shops, restaurants, and art galleries, now turned into enigmatic stage sets.

Without people these photos reveal the city’s primeval soul. They unveil a serene beauty most often obscured by the frenzy of our fast-paced lives. We see New York with new eyes. David Cohen, editor of Art Critical, writes, “The first reaction to Gregory Peterson’s poised, chilled shots of New York City is: Must be trick photography. He’s Photoshopped the people out―or else a sunny daylight in―in what must have been shots from the dead of night. But no: This is the capital of the world in lockdown. One has to go to de Chirico’s imaginary metaphysical paintings of Italian cities to find such radical depopulation.”

During the height of the lockdown, Peterson also captures the city’s response to swelling Black Lives Matter protests that shook the world after the killing of George Floyd. For the first time in living memory, midtown Manhattan and other areas were boarded up following Memorial Day due to fears of civil unrest, as documented in the chapter “Plywood New York.”

New York Stilled Life includes a Preface by Peterson in which he explains how his project evolved, and a Foreword by Barry Bergdoll, Meyer Schapiro Professor of Art History at Columbia University and the former Chief Curator in the Department of Architecture and Design at the Museum of Modern Art, New York, aptly titled “Empty Stages: A Short History of Urban Photography Absent People.”

Bergdoll writes: “Urban photography has always aimed to document both the architectural frame and the human actors that animate the city. But during the COVID-19 pandemic that swept over cities worldwide with little warning the actors suddenly vanished. How does an image captured through the lens of a camera come to be devoid of people? The answer has changed through time.” Bergdoll references Daguerre’s early photographs of bustling city scenes that he made in Paris in 1838 from his studio window. When he developed them, they were hauntingly empty of people, as the exposure period of his camera was far too long to record them.

On Peterson’s New York photographs made more than 180 years later, Bergdoll writes: “The city appeared depopulated, as all but essential workers frantically, heroically confronting danger in hospitals, remained at home … New York, like cities around the world, was as empty as the earliest photographic city portraits. … To witness, in Peterson’s photographs, the places on the tourists’ must-visit list devoid of all but avian life provides a sensation at once surreal and familiar.”

In his Preface, Peterson explains how the project began with posting the photographs daily on Facebook. There was a huge demand for his images from his quarantined and evacuated friends and colleagues. After a few weeks, they convinced him to create a book. Peterson writes, “I have never aspired to a career in photography. But I have come to realize these images have a special emotional hold over viewers as they encapsulate this unique interlude. Some may see them as eerie; others may experience a pang of sadness at the thought of the weddings, graduations, memorials, and other life events that were foiled, the businesses closed, the financial losses, political strife, and personal tragedies of this era. But when I view these images of the monuments, the landmarks, and touchstones of my existence, and I see them, truly see them, the backdrops of New York City life now center stage, I see my dearest friends, the city that has molded me, a montage of palpable memories and hopes for the future that only thrill my heart and make me love my city more.”

New York Stilled Life by Gregory Peterson is a comprehensive record of a unique, vanished moment; a memento of a time we all endured and how it changed us and our cities―perhaps forever. The book captures our experience and tells the city’s story, to those who were here and, equally, to those who weren’t. The book is published by Goff Books in January 2022 leading up to the second anniversary of the lockdown.

About the Photographer:
Gregory J. Peterson is a corporate lawyer, passionate amateur photographer, and noted art collector. A native, life-long New Yorker, he is a graduate of the High School of Music and Art (now the LaGuardia High of Music and the Performing Arts), where he studied oil painting and other media, and of Columbia College, and Columbia Law School, where he earned his Juris Doctor degree. Peterson sits on the boards of several nonprofit organizations promoting the arts, equality, and public wellbeing. He has provided pro bono legal assistance to nonprofit organizations and conceived of and executed many charitable events. Prior to becoming a lawyer, he was a filmmaker and television producer. New York: Stilled Life is his effort to document and share a momentous period in New York history with New Yorkers and the world.