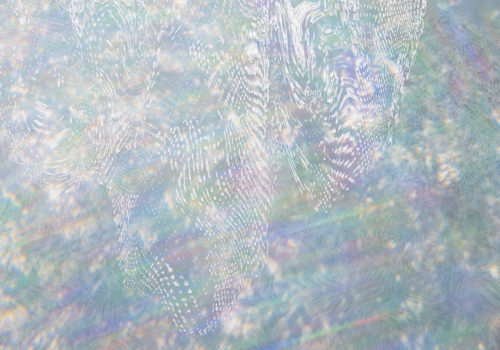 Gitterman Gallery presents an exhibition of recent work by Christopher Russell. Russell challenges the traditional conception of photography as producer of evidence by limiting the functionality of his lens to make fuzzy or hazy color photographs. The resulting images, abstract and ambiguous, form the foundation for drawings of the artist’s imaginary vistas. Russell draws by scratching through the emulsion with a razor, revealing the white fiber base of the print. Each artwork is at once a photograph, a drawing, and a bas-relief.

Russell is based in the Pacific Northwest and has long been taken with the majesty of its landscape. His new body of work has a theme of water running through it (pun intended). Russell is captivated by the idea of water as an unreliable narrator. Reflections upon its surface mirror its surroundings, but are easily destabilized, suggesting fragility in the familiar and offering a sense that things may not be what they seem. In a similar manner, a droplet of water on one’s glasses or camera lens offers a distorted view, suggesting possibilities lurking within our own certainty. The droplet, and water itself, can be a reminder of the vast perspectives that exist outside of our own.

Russell uses historical plant and floral patterns from the Arts and Crafts era of the late 19th and early 20th Century as source material for his drawing. The patterns are significant to Russell in that they evoke a time in which nature itself became a ubiquitous subject in art and literature, and also a metaphor through which all manner of cultural issues were explored. The stylized patterns that Russell draws from are examples of the desire to tame the wild, to create repeating patterns that are ostensibly infinite, holding the force of nature in the stasis of aesthetic pleasure.

Though he pushes conceptual and art historical boundaries, Russell remains a Romantic, and his artwork is a way for the viewer to experience the wonder that he has found, and that continues to inspire him.

Christopher Russell was born in Sacramento in 1974 and received a BFA from The California College of Arts and Crafts and an MFA from the Art Center College of Design. He has had a solo exhibition at the Hammer Museum in Los Angeles and his work has been featured in group exhibitions at The J. Paul Getty Museum, Los Angeles County Museum of Art, Norton Museum of Art, Armory Center for the Arts, White Columns, Tokyo Institute of Photography, and De Appel Arts Center in The Netherlands, among others. Russell has produced and published numerous literary and photobooks. His photobook Landscape (Kolapsomal Press) was included in Phaidon’s The Photobook: A History, Vol. 3, edited by Martin Parr. His work is included in numerous museum collections including the Brooklyn Museum; The Paul Getty Museum; Hammer Museum; Los Angeles County Museum; Museum of Contemporary Art, Antwerp; Museum of Contemporary Art, Los Angeles; Museum of Contemporary Art, San Diego; Museum of Fine Arts, Houston; Rhode Island School of Design Museum; and the Tokyo Metropolitan Museum of Photography.