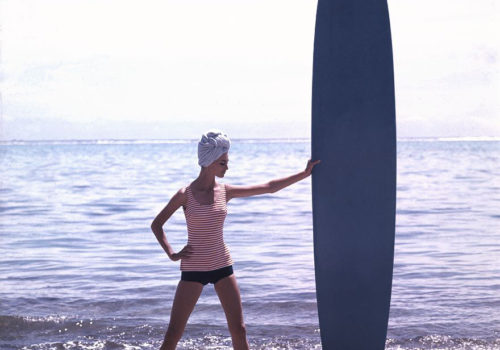 The exhibition of Georges Dambier fashion photographs at Bonni Benrubi in New York takes us back to a time when the word Style still had a meaning.

Writing about Georges is for me a rather intimate experience. You see, for full disclosure, I should start by saying that I grew up in his shadow, or more like in the shadows of his studio that my mother Micheline ran, though she was more like the director of a small orchestra of assistants, stylists, printers and an ever changing cast of models, actors and personalities from le “Tout-Paris.”

There, barely walking, I saw my first model, touched my first Hasselblad, took my first photograph while his dog Woodstock was laying nearby totally unfazed by the lighting bolts of the Balcar flashes. Years later I became his assistant.

These were the Sixties and the photos in this exhibition predate the time of my childhood. Still, the mood, the flair and the elegance were still the same, maybe Allure as Diana Vreeland would put it, is the word. Georges would not not have it any other way.

When Helene Lazareff hired Georges at ELLE magazine in the Fifties he was one of the first photographers in Paris to take his Rolleiflex and fashion to the streets. Whether it was the Champs Elysees or the souk in Marrakech, the models (actually mannequins as they were called) were suddenly giving life to the work of Givenchy, Dior or Balenciaga.

This was a time when Fred Astaire emulated Dick Avedon in Funny Face, when photographers like Dambier wore tailored suits, shirts by Charvet and shoes by John Lobb while driving British sport cars (an MGA in his case). Dorian Leigh or Suzy Parker would sip on a glass of Champagne to relax on his shoots. A far cry from the Grunge or the “Heroin Chic” of the Nineties.

Yes. When thinking of Georges and his photographs, Allure is the appropriate word. The “girls” were doing their own make-up and Alexandre was doing their hair. The assistants were licking the glue of hundreds bands to seal the paper of the films (I miss it today even though I always complained they came in one flavor only). No digital retouching, very unforgiving films and still, I am not sure that we can find today a model that dazzles as much as Bettina or Simone d’Aillencourt did on daily basis.

The elegant spontaneity of his photographs were new at the time, like in Slim Aarons images they show people “living the life,” which now seems like a lost art. Along with Dambier, Horst, Meerson or Beaton dressed and lived like Gentlemen but they were also consummate professionals. Behind the carefree and seemingly effortless images was a flawless technique. Today, too many photographers go back to these days to find “inspiration” (note the quotes…). Well, learning a thing or two about speed and aperture would not hurt and one should know that to create a stylish image, one better rely on a Martini cocktail than cheap beer.

Good manners and a dash of flirt help too. There is a line, a direction I heard Georges say to the models hundreds and hundreds of times: “Darling, you are in love with my camera!” I gladly confess I used it, surely not enough. Call me a tad nostalgic but, hey, looking at the women and the fashion in Georges Dambier’s photographs, given the opportunity I would jump any day in H.G Wells time machine. Wouldn’t you?

This exhibition represents an important cross section of Dambier’s long and influential career, including never before exhibited images of recently restored color negatives from the 1950s.

This is George Dambier’s second exhibition at Bonni Benrubi Gallery, representing the first major retrospective of his work in North America. Dambier worked for leading magazines and clients throughout his career, including Vogue, ELLE, Jardin des Modes and L’Oréal. His work is the subject of a monograph, Paris Fifties: Regards sur Mode, published in France in 2008.