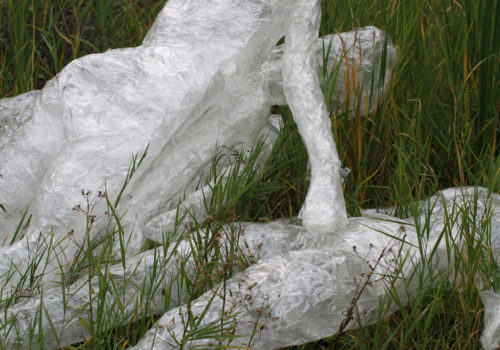 American photographer Dana Hoey indubitably reverses the role typically assigned to women in photography in her sophisticated scenography. There are several ‘openings’ to these images, such as desire, domination and female independence. With ‘Tribeca’ (named after a district of New York), she overthrows the conventional codes on the depiction of sexual organs – male and female – in an atmosphere underpinned by the tension of some subtle yet sophisticated self-referencing.

In an unorthodox approach, the woman is dressed and therefore holds the power over the naked man. This work – like all the artist’s output – accentuates an implicit feminism. The photograph depicts a smart, sophisticated woman, staring down at a small table where there is a bone ‘to gnaw on, instead of what is evoked by its phallic form’. Beside her, a naked younger man looks on with that almost melancholic air we might have after making love – or at least what felt like love at that point when the male organ – (chastely?) concealed by his arm – would be there, before the woman’s mouth, evoking both fellatio and the man-eater.

The way the characters play on submission is emphasised in a complex manner by the setting and situation and by clothing and nudity. Dana Hoey thus defies the space usually filled by the woman and the role that her body is supposed to play, setting it free: although on display, it conceals everything, playing the acrobat. There is a sense of loss or of obliteration, but that is a way of showing less to ‘say’ more. Fragmenting to focus, at the expense of the unimportant: a gesture suffices. In this kind of scenography, a strange narration follows its course. The visible traces of life, emotions and sensations have more than one meaning: male fragility and female strength are revealed but withhold some kind of essence from their rampant, empirical bodies. The missing element does not do away with the organic entirely but actually preserves more than just the outer robes: the essentiality. The onlooker is evidently focused on portions of the body and therefore lives, all of which take various forms. There is no need to compare the work to the ex-voto: contrary to that genre, here the body hovers and takes flight. Stripped of the superfluous, it hints at love and the flesh with the intensity of suggestion that falls outside the permitted models and leading to a search around composite destinies.